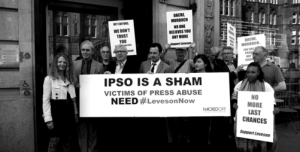 The sham press ‘regulator’ IPSO has seen its weakness and cowardice embarrassingly exposed this month in the case of the serial misconduct of the Jewish Chronicle.

Although IPSO claims it constantly monitors the conduct of its member publications, it was clearly taken aback by a joint public letter from nine successful complainants detailing the collapse of standards at the London-based paper.

The letter pointed to at least 28 code breaches* and four libel settlements in three years – an off-the-scale offence rate for a small weekly publication – and it asked IPSO, which had shown no sign of acting on its own account, to launch a formal standards investigation.

Caught on the back foot, IPSO has written back to Jo Bird, one of the complainants, asking for more time and promising a response from the IPSO chair, Lord Faulks, ‘in due course’.

But IPSO should not need more time, because it has emerged that its standards department was alerted to the problems at the Jewish Chronicle as long ago as November 2019 – by IPSO’s own complaints committee.  At that stage there had been 17 recorded breaches of the Editors’ Code in just over a year, and the paper had also been forced to settle one libel case.

It is not clear what if anything the standards department did at that stage, but since there have been 14 more code breaches and three more libel settlements since that date it is safe to say that even if it did something the ‘toughest regulator in the western world’ made no difference at all.

Worse, IPSO has had to admit a complete failure to act on a further reminder from a successful complainant, Audrey White, in July last year. They have had to apologise to White, saying that the relevant official had left IPSO and ‘the correspondence was unfortunately dropped’.

So, to get the chronology clear:

November 2019: In its ruling on the Audrey White case IPSO’s complaints committee  notes ‘unacceptable’ conduct by the Jewish Chronicle and states: ‘The committee’s concerns have been drawn to the attention of IPSO’s standards department.’ By this date IPSO has found the weekly paper guilty of 17 code breaches and there has been one libel.

July 2020: Nine months later, in the absence of any public sign of action, Audrey White writes asking what IPSO’s standards department has done in response to that formal November notification. She receives no reply.

August 2021: A year on, with the Jewish Chronicle’s score of offences now standing at 31 code breaches* and four libel settlements, nine of those falsely accused publicly demand a formal standards investigation. IPSO replies that it will get back ‘in due course’.

IPSO has claimed, in correspondence this month with Jo Bird, that it has ‘engaged with’ the Jewish Chronicle. It didn’t say when this occurred or what form it took, nor did it admit what is obvious: there has been no visible effect.

IPSO has also stated, in a comment to the news website The Canary, that it  ‘recently delivered training on Editors’ Code compliance to staff at the Jewish Chronicle, a service which is available to all regulated publishers’.

Note that this training was ‘recent’, and not, for example, in or soon after November 2019. Note also that it is ‘available to all’, in other words it is explicitly a normal IPSO service and not a special disciplinary or remedial action against the Jewish Chronicle.

IPSO also told The Canary: ‘We aim to take action to address issues of concern in a proportionate way, ideally at an early stage.’ If anything at all was done it was obviously neither proportionate nor early.

Thus, before it even decides whether it will conduct what would be its first ever standards investigation into the Jewish Chronicle, and after having to be publicly shamed into even considering such action, IPSO already stands convicted of a long-term failure to tackle an obvious collapse of standards at a member organisation.

And bear in mind that this is harmful. If IPSO had taken firm action in November 2019 it might have prevented the publication of damaging falsehoods about at least eight people, and it might have spared the readers of the Jewish Chronicle from being serially misled.

IPSO is the organisation that the corporate press, the government and their friends present to the public as an effective guardian of standards, yet no matter what way you look at it – the crazy rulings, the blind eye to racism, the corporate influence, the political entanglement or, as here, the extreme reluctance to take any form of action – it is simply a sham.

Brian Cathcart is Professor of Journalism at Kingston University.

* My count is 31 code breaches. It is characteristic of IPSO that, although its mission is supposedly to uphold the Editor’s Code, its rulings do not clearly state how many times the code has been breached. The casual form in which breaches are identified is bound to cause confusion.