In September we noticed an unusually high number of corrections in the press. Some of these reflect inevitable journalistic mistakes, others are deliberate, reckless or the product of careless journalism. When errors are made the Editors’ Code requires them to be corrected “promptly and with due prominence”.

Unfortunately this rarely happens. The super-size headline errors usually dwarf the tiny corrections that follow. We have exposed this in our series of “compare and contrasts”. These illustrate the lack of “due prominence” which corrections are given compared to original articles.

There are recurring patterns of mistakes – health and science claims are often unsubstantiated or stem from unverified research; and claims about minority groups, most recently migrants, are inflated and distorted. Our series shows how this behaviour continues unchallenged, with IPSO both powerless and unwilling to investigate these systemic code breaches.

A correction of significance appeared which appeared in September is a useful example. The original story, published in August 2014, alleged that a perfectly proper planning application, submitted by a member of a minority group, was responsible for triggering the murder-suicide of John Knott and his wife. (The case is well document in our previous blogs).

The story resurfaced in April of this year at the time of the inquest into their deaths. Despite evidence at the time and at the inquest that his wife’s severe illness was the main cause of John Knott’s actions, several newspapers continued to focus in on the fact that a young traveller woman had applied for planning permission for a caravan site behind their house.

The Daily Mirror published a correction this month (five months after the April article it related to, and more than a year after the story first emerged). It read:

Following our article of April 9, “OAP couple’s suicide pact over ill wife and gypsy site”, concerning the deaths of John Knott and his wife, Anne, we would like to clarify that their friend Mrs Keatley did not state at the inquest that Mr Knott was “at the end of his tether” over the plans to install caravans on nearby land. She stated that although Mr Knott was concerned about the proposal, the plans were of little consequence in comparison with his concerns over his wife’s illness. We regret any concern that has been caused.

Another correction was published this month relating to a poorly reported suicide story that we have previously mentioned – that of Olive Cooke. The Sunday Times wrote:

The article “Charities to ban bullying of donors” (News, last week) stated Olive Cooke had committed suicide after she received thousands of telephone calls and letters from charities asking for money. Her suicide was due to long-term depression.

Surely this inaccuracy, which due to the sensitive nature of the story could cause upset to the deceased’s family, could have been avoided given that Olive Cooke’s granddaughter went on national TV (This Morning) in July explaining that her grandmother had suffered from depression, saying explicitly: “I want to make it quite clear that the family, in no way, feel that charities were responsible.”

The Mail on Sunday published a correction relating to reporting on Muslims. It said:

An article on July 26 said a gang of Muslim youths was responsible for damaging Home Office immigration enforcement vehicles in Shadwell, east London, in the week the prime minister appealed to Muslims to help combat extremism. Muslim readers have asked to point out that the youths’ religion was unclear and, in any case, irrelevant to the story. We apologise for any offence caused.

This is not an adequate correction: the suggestion of a gang was merely the opinion of unnamed alleged eyewitness who used the term “I think” when giving his account. (This is the key point, irrespective of whether or not the gang was Asian or Muslim, and whether or not that point was relevant to the story). Yet the article reported it as a fact. Furthermore, the reference to a “Muslim gang” was in the headline of the article, but the correction was of much lower prominence.

This correction does at least include an apology (albeit only for “any offence caused” not for shoddy journalism) in respect of one clear code breach (clause 12 (ii) but fails to address the other code breach (Clause 1 (iii) – reporting allegations as fact). Under IPSO’s system, neither breach will be recorded.

Another example of a correction being published to deal with inaccuracies that had appeared to push a certain agenda was one in the Daily Express. The original article was about the Human Rights Act. The correction read:

This is to correct four points in our article: “Look at the people who benefit from human rights law” published on August 19 2015. We said that killer John Hirst had taken multiple cases to the HCHR, that in 2013 the ECHR ordered the UK government to pay £1.7 million in compensation, that an Algerian illegal immigrant had used human rights legislation to overturn a child protection order banning him from seeing his family, and that Cait Reilly had argued successfully that being made to do some work in return for unemployment benefit was a breach of her human rights. In fact John Hirst has only brought one case in the ECHR, £1.7 million is the total amount of compensation the UK government was ordered to pay in the period 1998 to 2013, the Algerian illegal immigrant used human rights law to stay in the UK, and whilst Cait Reilly won her case against the UK government, she was not successful on the human rights point.

Can four points of inaccuracy in one article be passed off as inevitable or even careless? Given the Daily Express’ strong anti-Human Rights Act position, and frequent publication of articles attacking it, it seems more likely that this was the result of reckless journalism or was published deliberately to back up their particular point of view. 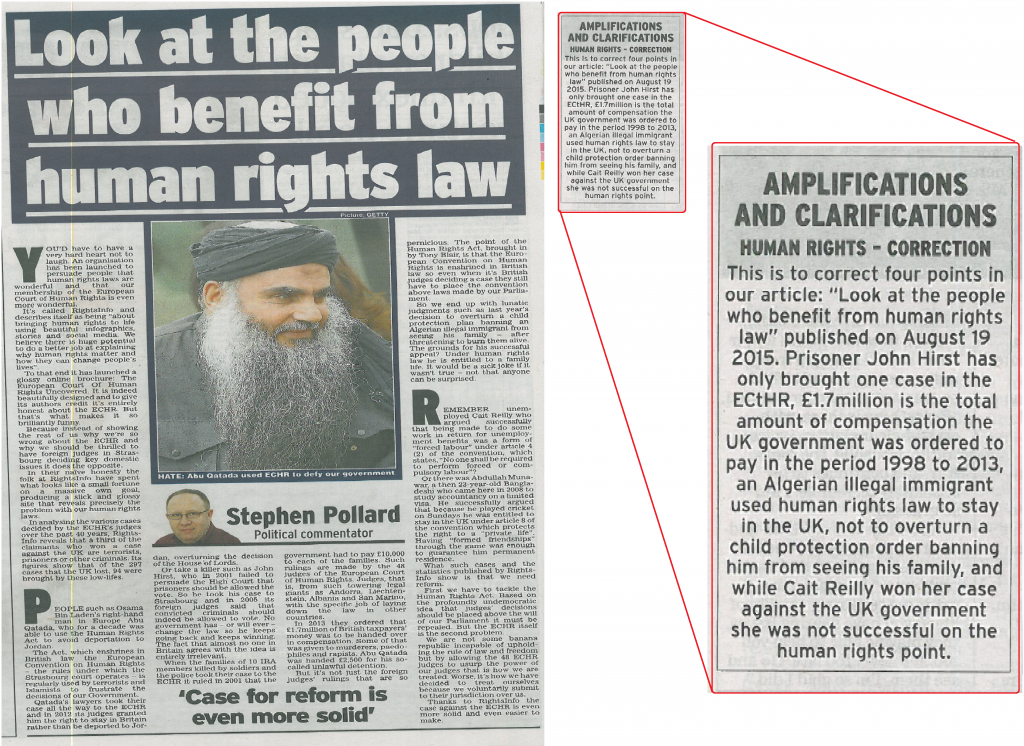 There were also a number of corrections of health stories, including this from the Daily Mirror:

On September 10 we published an article about a recent study by Prof John Collinge under the headline, “You can catch Alzheimer’s”. We would like to make clear that the research did not show that Alzheimer’s disease is contagious, but demonstrated that a specific protein (amyloid beta), known to spark Alzheimer’s could survive sterilisation of medical instruments.

Despite the fact that the story was a front page lead, and that inaccurate health reporting can obviously have serious consequences, there was only a tiny correction published at the bottom of page two. Once again this is an example of the pressing need for the ‘due prominence’ for corrections requirement in the Code to be taken seriously by newspapers and by their regulator.

This story was also published in the Daily Mail at the time, however they did not issue a correction until over a month later, on 19 October. 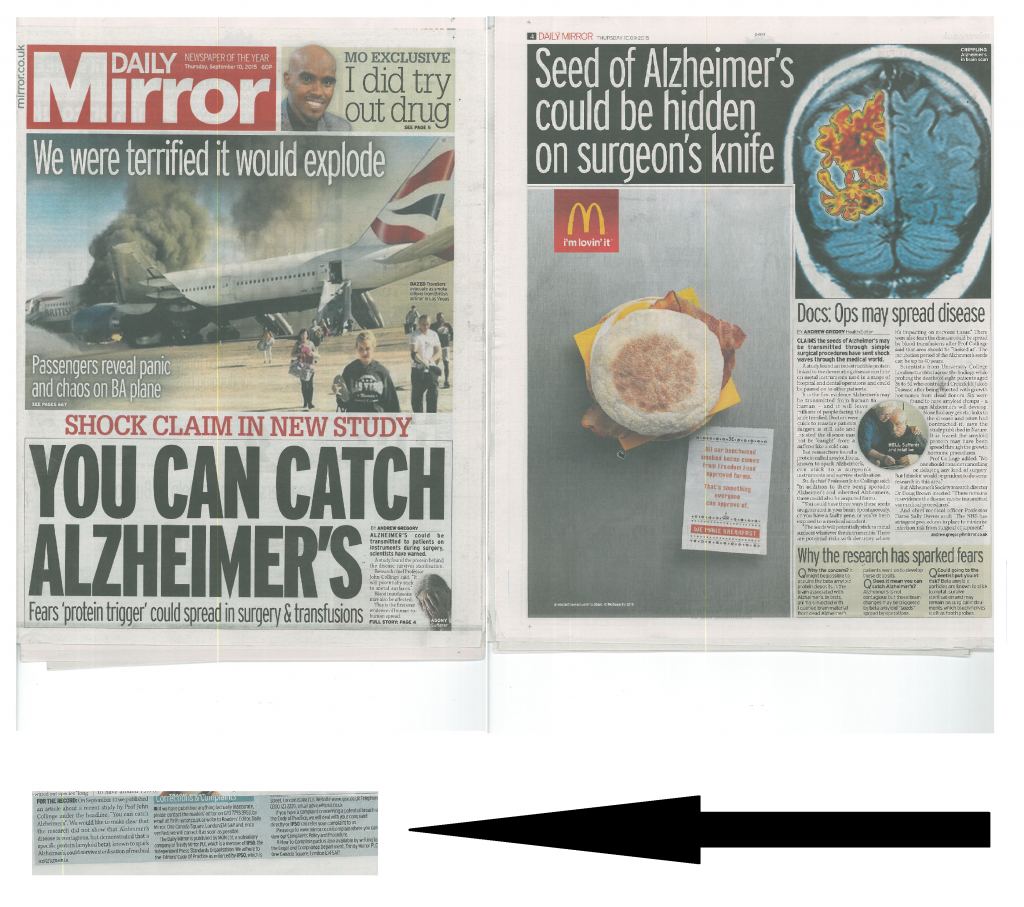 Mistakes happen. But it’s how you deal with them that matters and whether deliberate breaches are punished and careless errors learned from.

Reckless, careless and deliberately distorted reporting continues unabated in some British newspapers – just as it has for decades, as observed by Sir Brian Leveson and those who conducted similar Inquiries into the conduct of the British press before him. IPSO’s failure to tackle this systematic unethical behaviour, whilst simultaneously failing to even deliver equivalent prominence corrections, is further evidence that this sham body hasn’t the powers or appetite to deal with these matters at all.

Sadly, this article only shows the tip of the iceberg. Today’s situation is just part of a trend – journalism in the UK has become sensationalist and sloppy over the last twenty years or so, and in some ways this reflects the wider society in general. If I hear the phrases “Mistakes were made”, or “We have learned from our mistakes” one more time before Xmas (that would be Xmas 2017, you understand), I think I’ll throw up. “We apologise for any offence caused” is totally meaningless – firstly, the use of the word “any” in that context communicates “Well, I don’t think that any reasonable person should have taken offence but clearly some idiot did, so I’d better apologise”. Secondly, what possible advantage to the offended person is just an apology? I would want to know that the sloppy journalist who was only after a sensationalist headline had had his (or her) knuckles well and truly rapped, and that, if it happened again, (s)he would be sent back to school till (s)he got it right!