What do YOU think is the most important issue in the press today? 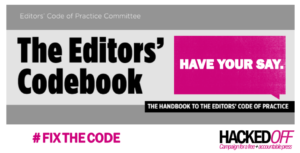 Follow one of the links below to tell newspaper editors to fix their broken standards code:

Each link will take you to a letter drafted by Hacked Off, which you can adapt however you like, to send to the editors who write the standards code used by IPSO.  The code is full of loopholes, and Hacked Off has drawn from the expertise of a range of organisations to come up with specific and direct fixes to improve the Code in each of these areas.

None of these proposed changes will solve all of IPSO’s problems, and the draft letters reflect that by saying very clearly that IPSO must pass the Leveson test of “Recognition” before it will be able to regulate the press effectively.

Nonetheless, writing to editors in this way puts the pressure on, and helps us take the case directly to the press that standards must change.

About the Editors’ Code of Practice

The Editors’ Code of Practice is written by the Editors’ Code Committee, which has a majority of newspaper editors.  That Committee is owned by a group of newspaper executives and a politician, called the Regulatory Funding Company. The Code of Practice they produce is what IPSO is required to enforce (that’s right – IPSO doesn’t even control its own standards code).

IPSO itself lacks the basic powers necessary for a regulator to function, and in a serious infringement on freedom of speech it is chaired by a politician.

None of these arrangements are compliant with the basic standards of independence and effectiveness of regulation recommended by the Leveson Report.

The Editors’ Code Committee are currently consulting on changes to the Code, and we encourage supporters to write to them with one of the letters above (or more than one!) to put the pressure on editors directly to improve standards.