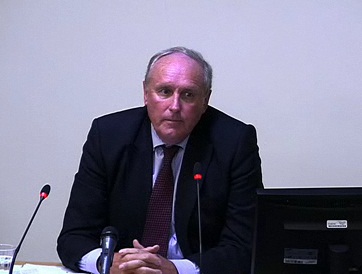 THE TIMES reported the weekend before last that former Daily Mail editor Paul Dacre had been asked by the Prime Minister to become the Chair of Ofcom (a position neither advertised, nor yet vacant).

The story may well be untrue.  Or, perhaps more likely, the story might well have been faithfully reported by The Times as briefed by the Government, but that Johnson himself has no intention of following through with the appointment (more on this below).

Either way, the prospect of Paul Dacre becoming chair of Ofcom deserves some scrutiny, for its sheer absurdity if nothing else.

Striking unsuitability for the role

It is difficult to imagine a person less qualified for the role of chairing the UK’s broadcast media regulator Ofcom than Paul Dacre.

The least one would expect from the chair of a body which has the weighty responsibility of regulating the British broadcast media is a commitment to editorial standards.

Yet Mr Dacre’s 26-year tenure as editor of the Daily Mail (much of that period spent as editor-in-chief of Associated Newspapers – the publisher also responsible for the MailOnline and Mail on Sunday) was characterised by repeated and severe standards breaches – many of them resulting in complaints, legal action, and often irreparable damage to individuals’ lives and reputations.

Consider Andy Miller, the businessman whose reputation was unfairly ruined after he was libelled in the Mail.  Or Juliet Shaw, a woman whose straightforward interview with the Mail about moving to the countryside was twisted into a mucky feature about her romantic life (much of it fabricated).  Or Danielle Hindley, whose home beauty business was smeared in the Sunday paper.

Some might argue that Mr Dacre’s lack of commitment to ethical standards or inability to apply them at his newspaper derived from his lack of confidence in the standards themselves.

Those standards were not, however, thrust upon him.  They were written by a committee of his peers – fellow newspaper editors – chaired by, er, a Mr Paul Dacre.

That’s right: Paul Dacre’s newspaper found itself incapable of following the standards he and his peers had devised.

Between 2008 and 2016 Paul Dacre chaired the Editors’ Code Committee, the complaints-handler enforcing the standards was the Press Complaints Commission (a body which Dacre was a member of between 1999 and 2008).  Latterly, the PCC was superficially rebranded as IPSO.

Both IPSO and the PCC before it suffered from powerlessness and pro-press bias, with many complaints not even eligible for consideration.  Even so, the complaints-handlers recorded staggering numbers of complaints against the Mail under Dacre’s editorship, running into the thousands.

Newspapers must work very hard at being very wrong to get sanctioned by IPSO, with the complaints system riddled with loopholes and opportunities for newspapers to escape sanction.

But under Dacre, the Mail’s record for generating adverse adjudications was – relatively speaking – prolific, with the Mail and its sister titles consistently named among the highest-offending publishers.

Surely there are candidates for the job who proven experience of involvement with effective independent regulation.  The capacity to do so ought to be the bare minimum the appointee should be able to demonstrate.  On this simple test, Dacre falls well short.

Of course, the story may be nonsense.

The Times itself has, at times, shown little regard for accuracy.  But more to the point, the story itself is entirely based on anonymous briefing, with no one on the record to confirm the story’s veracity.

It is a practice of politicians to use anonymous briefings in the media to float proposals before acting on them (or sometimes, with no intention of acting on them at all), for political reasons.

Newspapers allowing themselves to be exploited in this way, without applying due scrutiny to the sources of stories, damage the integrity of the profession of political journalism.

This practice leaves the public with little reason to trust reports like these.

A serious threat to media freedom

One point emerges from this is that allowing the government of the day a hand in the appointment process for the Chair of Ofcom represents an unacceptable risk to freedom of expression.

The prospect of Dacre’s appointment is like a theoretical exercise in what would happen if a government abused its role in the Ofcom chairperson appointment process.

Mr Dacre is clearly a partisan figure, with a record of using his newspaper to support the Conservative Party.  One does not need to take a view on party politics to understand that politicians putting their partisan, ideological bedfellows into positions of power at media regulators is democracy-endangering stuff.

We believe that media regulation must be kept out of the hands of politicians.  That is why Hacked Off support the Leveson model of regulation for the press, which is the only model of media regulation which fully protects newspapers and their regulator from political influence.

Likewise, Ofcom must be kept entirely independent of politicians, and its chair appointed without political influence.

The Times’ report on the story remarks:

“Dacre is a bogeyman figure for many on the left, but his allies often stress that he has a history of defending freedom of expression…”

If there is any truth to that, Dacre would not go anywhere near a government-appointed media regulatory job like this.