A number of newspapers in the UK have a problem reporting accurately, and in a way that is not abusive, about Muslims.  The problem persists because instead of an independent regulator, most national newspapers are members of IPSO: the complaints-handler set up by the newspaper industry to serve the interests of that industry, and not the public.

Most people would consider the capacity to investigate a complaint against a newspaper to be among the minimum qualities to be expected of a newspaper complaints-handler.  Not so, when it comes to IPSO.

The Editors Code of Practice, which is drawn up largely by newspaper and magazine editors, and which sets standards by which publications can be held to account by IPSO, does not permit discrimination complaints about groups of people.  Although this can apply to any group which is targeted in the press, some of the most serious abuse is reserved for Muslims.  When it comes to inaccuracy (which can have a discriminatory effect, and is also common in stories about Muslims), complaints are considered, but rarely is any remedial action remotely proportionate to the breach.

At the turn of the year, IPSO announced they would introduce guidelines for reporting about Muslims – due to come into effect in September 2019.  But guidelines have no regulatory force: complaints cannot be brought on the basis of a breach of the guidelines, and there is no sanction for ignoring them altogether.  They are fundamentally a PR tool; designed to provide perception of action being taken on media Islamophobia, while in reality, doing nothing to substantively address the issue.

IPSO could have demanded changes to the Code, so that complaints about discrimination against groups of people could be considered.  IPSO could have demanded control of the whole standards code itself, as if it were a serious regulatory body. It could have changed its rules to require equal prominence corrections for accuracy breaches and insisted newspapers comply with such rules.  Instead of any reform which would be likely to have any meaningful effect, it has opted for a page of platitudes which, we know from experience, will be ignored.

Guidelines have previously been published on suicide reporting, reporting on transgender people, and other issues.  There is no evidence to suggest that reporting on those issues ever improved as a result; indeed, some of the guidance on transgender reporting has had to be republished more than once after it was repeatedly ignored.

But last week, the think-tank Policy Exchange published a report exposing the “threat” to the freedom of the press posed by IPSO’s new guidelines.

To be clear: these are unenforceable guidelines, published by a toothless complaints-handler, which continues to be at the mercy of a committee of newspaper executives who heavily influence its rules (called the Regulatory Funding Company) and a committee of editors who write the standards code (the Editors’ Code Committee).  The guidelines are redundant in every sense of the word.

This hasn’t stopped Policy Exchange from churning out a 28-page report warning of the end of press freedom.  But the real agenda cannot, rationally, be to save press freedom, when it is so clearly not at issue in the production of these impotent guidelines.

Rather, this is a ludicrous and transparent attempt at misdirection.  Suggesting that IPSO is “too strict” deliberately conceals the reality that IPSO is an entirely ineffective body, subject to industry control and influence at every turn, and unable to regulate competently.

The report begins with a foreword by Trevor Phillips, who attacks various straw men who are supposedly trying to restrict newspapers’ freedom to report on minority communities without fear or favour.  He refers to the “well-organised, well-funded, persistent and ruthless lobby” of critics of media inaccuracy and abuse. That could mean Hacked Off (approx. 5 FTE equivalent staff), MEND (a Muslim advocacy group which relies on volunteers across the UK), two semi-retired journalists, Professor Brian Cathcart and Paddy French, who produced a recent expose of Islamophobic coverage at The Times, or Miqdaad Versi, a one-man complaint machine, who does much of his advocacy work in his spare time.  We cannot deny that we are persistent.

As the Report engages with the guidance itself, which it claims to have seen but does not publish in full, it takes issue with a series of broad and uncontroversial sentiments that IPSO expresses about how newspapers should engage with their readerships – taking every opportunity to find ‘evidence’ of IPSO overreaching itself.  There is, at least in the Report’s foreword, no acknowledgement of the fact that IPSO’s guidance is composed of platitudes that have no power or regulatory force at all. They are, in terms of accountability, meaningless.

Wrongly, it asserts, “If readers don’t like what a newspaper says, they can say so, stop buying it and – in cases where they have been libelled – sue.”  It is an often-repeated myth that if someone is libelled by a newspaper they can simply “sue”.  The realities of bringing legal action are extremely complex – and the financial risks can put the prospect of justice out of reach for all but the wealthiest.

The report even goes so far, in trying to find freedom-menacing details, as to criticise the guidelines for paying lip-service to the need for greater newsroom diversity: “Is it not a decision for newspapers and broadcasters themselves as to whom they employ?”.  As if IPSO are about to insist on representative employee quotas.  This is an absurd criticism to make of a complaints-handler which cannot get to grips with the content of newspapers, let alone their governance.

Hacked Off come in for specific mention, as having “singled out [Times journalist Andrew Norfolk] for relentless criticism”.  Actually, Hacked Off have praised Andrew Norfolk for good journalism, while supporting specific and evidence-based criticisms of other examples of his work.  Criticism has neither been “relentless”, nor has it been without detailed evidence. 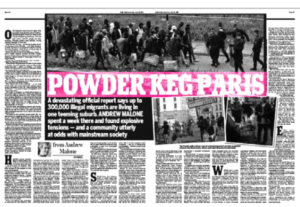 One specific story about Muslims analysed by the report is the “Powder Keg Paris” story, which concerned what the Mail perceived to be a troubled district in Paris.  This was a double-page spread in both the Daily Mail and MailOnline in August 2018. A vast number of details in it were later found to be substantially inaccurate. Marwan Muhammad, a French campaigner, tore holes in the story online.  He found 15 inaccuracies.

But the Report criticises the complaint made against that article by Miqdaad Versi (which was upheld even by IPSO), on the grounds that he did not provide sufficient evidence of falsity: “it is curious that Versi’s challenge to the journalist’s account should – absent any compelling factual counter-evidence of his own – have been given a hearing”.  The idea that the burden of truth for a story should not fall on the well-resourced news organisation which published it to millions of people in the first place, but instead upon a private individual running a complaint in his spare time, speaks volumes about Policy Exchange’s whole attitude to regulation.

Analysts and commentators claimed that the errors in the article ran into double figures – 15 were found by campaigner Marwan Muhammad.  Even IPSO found 9 factual errors in that article, eventually, after a four-month investigation. Yet PE find that those errors – yes, all 9 of them – “have little bearing on the overall thrust and meaning of the article”.

In its conclusion, the report represents IPSO as a 21st century Lord Chamberlain; making judgments on what is permissible and what should be censored.  This is plainly nonsense: we are talking here about a body which, in five years, has not mustered even a single standards investigation.

Finally, on page 22 of the 28-page report, some apparent ‘evidence’ of the impact of IPSO on the press is cited: “Already, there are signs that it is taking a toll on the way the press behaves”.  Except, as it turns out, that ‘evidence’ consists of a few unnamed editors claiming that they are nervous about publishing anything related to Islam.  Clearly not nervous enough to stop altogether, given the ongoing coverage Hacked Off has recently campaigned on, and was exposed in the Unmasked Report.  And it is not clear why they need to make their claims anonymously: Trevor Kavanagh has been publicly complaining about this, without any reasonable basis, for months.

The other piece of ‘evidence’ of the way certain newspapers are allegedly tiptoeing around issues relating to Muslims is that, according to Policy Exchange, editors shied away from naming Sadiq Khan as being among those targeted in the manifesto of the Christchurch terrorist.  It is entirely unclear, however, how the guidelines, even if they were enforceable, would affect a newspaper’s ability to name Khan in that context. Nor would naming him breach the group discrimination clause that Hacked Off and many others have campaigned for.

In any case, the comment is undermined by the fact that several newspapers did report this detail.  Not least, The Times, The Express, The Mail, The Metro and The Independent.

The report finishes by asking if the guidelines will be a step towards “further restrictions on media freedom” – despite the fact that they do not constitute “restrictions” in any sense of the word.

No-one should be in any doubt about what this is: it is part of a campaign of misdirection, to give the illusion of overzealous regulation of the British press.  Nothing could be further from the truth.

The reality is that IPSO is a dead duck, providing no meaningful protection to the public, and primarily serving the newspaper industry.  Until it is reformed or replaced to meet the Leveson requirements for independent regulation, as enshrined in the Royal Charter, there will be no justice for victims of press abuse – both individuals and groups.