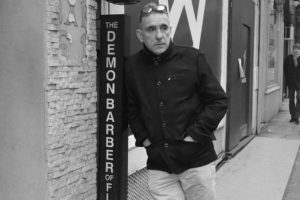 day, former journalist John Ford came forward to blow the whistle on illegality he says he committed on behalf of The Sunday Times newspaper.

Following these revelations, an Urgent Question was asked in the House of Commons today about what the implications of the revelations are for finishing the Leveson Inquiry. Secretary of State Matt Hancock defended his decision to cancel the Inquiry (which would have looked into these matters) by arguing that these matters were not “current” but “historical” and also that they were matters only for the police.

But during and after a press conference today, John Ford contradicted Mr Hancock’s remarks.

Asked whether this conduct was all in the past, Mr Ford said,

He later added that “the blagging industry” would meet a market demand and the newspapers’ appetite had not been removed either by the police or the ICO or by effective regulation.

He also said that since the Sunday Times were denying they knew what he was doing, despite paying him £40,000 a year for 15 years, there was a cover up and that was very much “current”.

Asked whether the police had ever investigated him and found the newspaper’s involvement, he said he had been arrested in 2010 and had been subject to a 2-year police investigation which either failed to find the Sunday Times involvement (despite documentary evidence in his bank statements and on his hard drive) or which decided to look the other way.

I do not think any Sunday Times journalists were even questioned, let alone charged. This cannot be solved by the police – it needs the Public Inquiry.

Today’s revelations show that what we know in terms of illegal conduct at or on behalf of newspapers is just the tip of the iceberg.  Not only are The Times and Sunday Times now embr

oiled in the press data theft scandal, but Trinity Mirror have made extensive admissions and allegations have been made concerning the Express, Sun, Telegraph and Mail as well.

Commenting on how the revelations affect the need for Leveson Part Two, Dr Harris added,

The Government’s decision to cancel Leveson Part Two appears less tenable by the day.
Defending their decision to suppress the Inquiry, the Government claimed ‘those in the press who were found culpable for the most egregious behaviour… have bee

n held to account’ [i]. Today’s revelations show that couldn’t be further from the truth, as Mr Ford’s employers and minders have never faced justice for the thousands of illegal acts they commissioned.

Notes: Hacked Off is the campaign for a free and accountable press, and we work with the victims of press abuse to achieve those aims.

For press enquiries and interviews: Email press@hackinginquiry.org or call Nathan Sparkes on 07554 665940

[i] Quote taken from p3 of the Government Consultation response.

Where is the justification for secrecy? Where is the justification for unaccountability? Where is justification for immunity? If justice is corrupted? (not done not just seen to be done) then society has the right to rebel and disobey the fundamental governance of that society, it is not just a right to disobey it is a duty to refuse to comply, consent, conform . That is a reality, when justice is denied society becomes the victim. How dare governance claim that the denial of justice is in the public’s interest, How dare they say that it is denied in the interests of national security and public safety. Justice/law,accountability, and the implementation of such are always in the public interest, always serve the public, always protect the public. The guilty escape in freedom whilst the whole suffer as victims. Evil forces are at work and play here, The time has come to end the protectionism of the so called elite. They are no elite, people are people ,they humans just as all people are humans , born innocent and equal as human.. equal in law, equal in justice otherwise the rule of law has no justice, no merit, no value, no worth. The justice system/law etc becomes nothing more than a corrupted empty vessel.

We all have lived this corrupt system for years
The game of voting and blame game, it’s time for the system to go and have an equal and true democratic system installed, democracy is dead aboupt well over 2000 years ago, we can’t have this carry on, all I can see is people live to work to survive, you made as well be dead!!!

Mr Bernard wake up and smell the coffe..up untill now the free press have been ,the opposition to government.IT is only in recent times has the incestual relationship between govt/press has become clear.This corruption reaches through to regulators and lawmakers alike.. when you talk of the people,we are here to feed the vultures that live in the immoral cesspit of financial greed who are to big to regulate and have the financial clout not to be prosecuted.

They phished for info on a dead girls phone. Do the Tories think we forgot? Do they expect to be in power next term? I guess its their only chance to hide the level of wrongdoing and dark association between press and government.

Surely things can only be hidden but they don’t cease to exist. Th truth will always out, just not always when we want it to…

Thank you Simone! You’re an inspiration!