A YouGov opinion poll conducted on 19 and 20 July 2018 has shown overwhelming public support for pre-charge anonymity of suspects.  The results are startling: 86% of respondents support the anonymity of suspects under inviestgation and 83% support the anonymity of those arrested.Mr Justice Mann’s decision in Sir Cliff Richard v BBC that the claimant had a right to privacy when under investigation has been subject to almost universal criticism in the press.  It has been suggested that this a serious threat to press freedom. Few media outlets have published the contrary view that the right to privacy of suspects should generally prevail.

The poll results show that the public has not been convinced by the one sided media coverage of the Cliff Richard judgment.

A striking feature of the poll is that, contrary to the current approach of the courts, a majority of the public (60%) favour post-charge pre-trial anonymity with 62% favouring anonymity for those on trial who have not yet been found guilty of an offence.  This accords with the position in a number of other European countries.

It is only after conviction that the large majority favour the naming of individuals, with 88% in favour of the publication of the name at that stage.

As with press regulation (where a majority of the public favour statutory regulation) the press are out of step with their readers on an issue which involves their own interests.

The details of the polls are set out here: 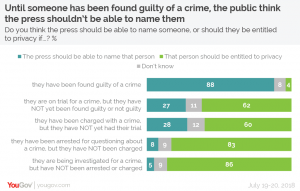 The full results of the poll can be found here [pdf].

This piece was originally posted on Inforrm and is republished with thanks.