A new Hacked Off report examines IPSO rulings over a one-year period in 2020 and exposes how, after seven years, IPSO has failed to establish itself as an effective regulator.

Among the key findings: 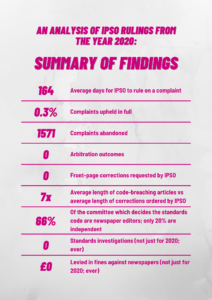 An analysis of IPSO rulings from 2020 has exposed the impotence of the press complaints-handler.

Dr Tom Chivers, who carried out the research, commented that,

IPSO claims that its complaints process is quick, fair and effective. This analysis shows that nothing could be further from the truth.

Instead of holding powerful publishers to account for inaccurate or unethical reporting, IPSO drags its heels when investigating public complaints and lets newspapers off the hook for serious breaches of the Standards Code.

On the very rare occasions when IPSO does rule against a newspaper, the corrections it orders are miniscule, vague and printed weeks or even months after the original article.

While IPSO does nothing to improve standards in British journalism, the British public deserves a truly independent and effective regulator, one that supports accurate, ethical reporting and meets the recommendations of the Leveson Report.

IPSO isn’t working. The public was promised an independent, robust system of press regulation that would ensure the shocking ethical breaches that Leveson revealed would not be repeated. IPSO tells a good story, claiming that it is holding the press to account, but the data confirms that this just isn’t so.

IPSO does not hold the press to account for the simple reason that it can’t. Its various corporate structures and contractual arrangements prevent it from doing so.

IPSO must be replaced.

The findings of this report, which are based on IPSO’s published complaints statistics from its Annual Report and Dr Chivers’ own research, are damning.

Vast majority of complaints were rejected.

In total, over 90% of complaints were rejected, with only 0.3% upheld.  Vague reasons were given for thousands of complaints’ rejection.

In fact, the proportion of upheld complaints was so low in 2020 that complainants had a greater chance of winning a prize on the EuroMillions lottery than having a complaint upheld by IPSO.

IPSO takes on average 6 months to rule on a complaint.

The process is gruelling for complainants, who must not only explain how they are affected by the story but also how, specifically, the story breaches the Editors’ Code of Conduct.

If the complainant is unable to prove, to the satisfaction of the complaints committee, that a breach has occurred the complaint is rejected. This quasi-legal process is a daunting task for the non-specialist, especially when the heavy emotional burden caused by the hurt of the offending story is factored in.

Given how attritional the complaints process is, it is no surprise that our research found that over 1500 complaints were given up on.  Complainants simply gave up and threw in the towel.

IPSO claims to be a ‘tough’ regulator that holds newspapers ‘to account for their actions’. Its chief weapon to do so is the power to impose up to £1m in fines. Yet IPSO has never fined a newspaper so much as 50p.  It has not even instigated a single standards investigation in its history – despite the fact it claims to have handled 100,000 complaints and enquiries since 2014.

Without effective, independent regulation, the only duty that the press has is to its shareholders or owner.

It is free to invade the lives of anyone – the known and the unknown, the rich and the poor, the powerful and the powerless.

The rights of those who suffer press abuse should be upheld through independent and effective regulation – not a sham body controlled by the industry.