Liz Truss’ election as the UK’s next Prime Minister marks a significant turnaround after she almost missed out on the run-off altogether, having been behind both Rishi Sunak and Penny Mordaunt for most of the MP voting period.

Today, a Hacked Off analysis of hundreds of articles published in Conservative Party-supporting newspapers reveals the extent of press bias during that period, which saw Truss drive past Penny Mordaunt at the very last round and into the final two – and in pole position to win the runoff and become Prime Minister.

Examining hundreds of articles in Tory newspapers across the two-week race to reach the final two, Hacked Off has found:

Newspapers seeking to influence the outcome of elections is nothing new, but the ferocity of the Tory press’ campaign against Penny Mordaunt’s candidacy suggests that some titles are becoming more desperate in their attempts to move voters one way or another.  There is not even a pretence of balance in the overwhelmingly hostile coverage faced by Mordaunt, particularly from the Mail, which is perhaps embittered by its failed attempts to defend the outgoing Johnson administration.

The fact that Mordaunt ultimately lost out to the Mail’s favoured candidate Liz Truss, who has gone on to win election as Prime Minister, shows how powerful newspapers still are in politics.

The way Conservative-supporting newspapers, on balance, rallied around the more right-wing candidates suggests that the Tory-backing press has become more extreme and is shifting further away from the political centre-ground in those newspapers’ leanings and coverage.

The fact that even Rishi Sunak – a Chancellor of Johnson’s administration and committed Brexiteer – now appears to be considered too “left-wing” for The Mail and The Telegraph shows just how extreme the Conservative-backing press has become.

There is nothing wrong with partisanship in the press in principle, but newspapers becoming fanatically and factionally aligned with a ruling political party raises the risk of corrupt and unhealthy relationships between politicians and the press.

Conservative Party members – and the rest of the public – deserve better.

This research is based on a review of every article about the Conservative leadership race across the period July 7th to July 20th (the duration of the MP-balloting phase of the leadership race) which could be found on the websites of the UK’s four leading Conservative Party-supporting newspapers: The Times, The Telegraph, The Sun and The Daily Mail (and their Sunday papers).

Each article was analysed, and it was recorded whether the article would give, to an ordinary reader (who was not necessarily a supporter of the Conservative Party), a positive, negative, or neutral impression of each of the candidates. Candidates with fewer than 20 substantive references across these newspapers were not included in the analysis.

The findings paint a picture of a hyper-partisan, divided and agenda-driven part of the newspaper industry, determined to install their chosen candidate in Number 10.

There is nothing wrong with bias in the press, and coverage will inevitably favour one candidate over another.  But this research indicates a forceful effort on the part of some of these newspapers to have their chosen candidate elected.

The fact that Truss came from behind to ultimately win a place in the members’ vote after some newspapers campaigned so assertively in her favour suggests that – when it comes to the Conservative Party leadership (and by extension, the rest of the country in this case) – these newspapers are as powerful as they ever have been.

Hostility to Mordaunt was vociferous – and perhaps agenda-driven

It is a mixed picture for most candidates, but for Penny Mordaunt it shows net hostility from all titles, with The Telegraph and The Mail covering her campaign particularly negatively. 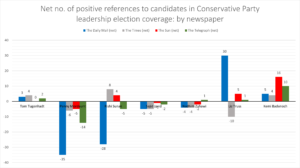 The chart below shows the net positive references (positive references minus negative references) to the most-covered candidates in Conservative-backing newspapers on each day of the race.  Day 1 is July 7th – the date of Johnson’s resignation – and day 14 is July 20th: the conclusion of the race, when Sunak & Truss were chosen for the membership run-off.

This suggests that it wasn’t until the first MP ballot was held (day 7) that coverage began to shift away from Mordaunt.  This was perhaps a reaction to Mordaunt’s surprisingly positive result in that first ballot, in which she placed second.  At that point in the race, Sunak and Mordaunt – two candidates perceived to be among the more moderate of those standing – were on course to go to the members’ vote.

From that point on references to Mordaunt become extremely negative, and she suffered deeply hostile coverage for almost the entire week going into the final MP ballot.

The Tory-supporting press was heavily divided, with The Mail backing Truss and The Times supporting Sunak

The chart below shows the difference in net positive coverage of the between The Mail and The Times. 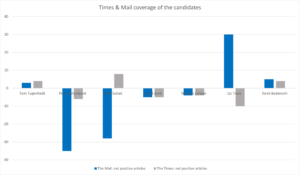 The most significant difference in net coverage among the papers was between Truss & Sunak.  While The Times, which was more balanced than The Mail overall, gave better coverage to Sunak and poorer coverage to Truss, the Mail repeatedly attacked Sunak and defended Truss.

In general, The Mail’s coverage was viciously partisan, with the paper clearly targeting Mordaunt and Sunak, while praising Truss.

This perhaps marks a continuation of the Mail’s coverage of the Johnson administration, which was far more positive than rival newspapers (even on the right). 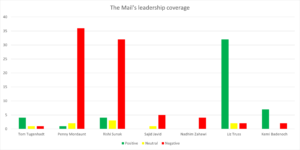 The balance of coverage from the Mail on the top three candidates – Mordaunt, Sunak and Truss – shows overwhelming bias and partisanship.

The balance of The Mail’s coverage: by candidate

Overall, the further to the right candidates were positioned, the more likely they appeared to garner support from the Conservative-supporting press.  In fact, the most right-leaning candidate of all, Kemi Badenoch, secured the most favourable coverage.

The only exception to this rule was Tom Tugenhadt – who achieved positive coverage despite his status as the most moderate of the candidates standing.

The chart below gives the net positive coverage achieved by each candidate, and orders them from the most moderate to the most extreme (a judgment based on the limited policy announcements made by each candidate). 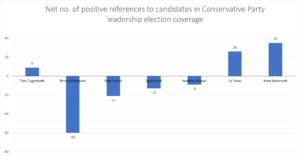 Get the data here.

Thank you very much for an interesting piece of analysis with concerning results.

Why is the BBC and other broadcasters supposed to be balanced, but it’s OK for Newspapers to be biased?
If they are NEWS papers they should be unbiased as well.
When we are school, we are taught to read. We read Books. Some of them are fiction and some fact, but we are trained to BELIEVE what we read.
So the Party with support from the Lies in the press have an undemocratic advantage.
When I was young there was the Daily Herald which supported the left, and as far as I recall, was a newspaper for the working class, i.e. it had stories about Celebrities and Sport. The Guardian hardly fulfills that role.
(Something wrong with the spacing below, I can’t get my wote email address in. It’s not long. It’s fcaves@talktalk.net

Thanks for the v. interesting, thoroughly analytical article. I’m an Ex-Mil. Expat residing in the FRG; my ‘post Brexit’ status “3rd country National with permission to reside [in FRG/EU]; ‘Blue Card’ holder!! However after 15yrs+ residence here, I am disenfranchised within the UK but not allowed to vote in federal govt elections here “Taxation without representaion is tyranny!” sic; Thomas Jefferson ca 1756!