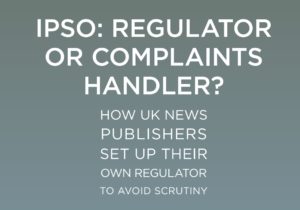 Why does IPSO matter? A new report out this week examines the press complaints body in minute detail and finds it to be little better than a cynical attempt to evade proper regulation, but why should we care?

1. Every day in this country newspapers unjustly wreck the lives of ordinary people who have no chance of redress. They do this because they know IPSO will not stop them.

2. The failure of IPSO encourages a race to the bottom in UK journalism, where those with the lowest standards gain the highest rewards in terms of clicks and impact.

3. The government is about to make all of this worse with an ‘Online Safety Bill’ extending extra privileges to the corrupt press while stoking hatred and abuse – and IPSO is central to that plan.

In a way, we all suffer from IPSO’s failure because a healthy press is an important part of a healthy democracy and IPSO is doing a lot to ensure our press is anything but healthy.

Our leading newspapers, owned by tax-shy billionaires and so closely intertwined with the government it’s often hard to tell who is driving policy, mock the idea of journalism speaking truth to power and far too frequently exploit inaccuracy, discrimination, and intrusion to underpin their propaganda.

As the academics Gordon Ramsay and Steve Barnett lay bare in their new analysis, IPSO: Regulator or Complaints Handler? How UK news publishers set up their own regulator to avoid scrutiny, IPSO itself is wrapped up in cynicism and lies.

These are not casual observations, although the truth is not hard to see. They are findings based on meticulous academic research into the detail of IPSO’s legal paperwork, its operating structure, and its workings in practice over seven years.

To any such organisation that cared about the work it did, and to anyone who cares about the standing of journalism in this country, these research findings should at the very least cause serious alarm. No one should even think of defending IPSO unless or until they can answer in detail the charges presented by Ramsay and Barnett.

Ministers and other politicians who casually declare that the UK press is regulated, unless they can rebut this report, should think again. And working journalists who find fault in the regulation other industries – the mail, banking, health, the law – should pause to consider the hypocrisy of their own position.

To take one example, the report meticulously unpicks the problems of investigations and fines. When IPSO was launched, leading newspaper executives publicly promised ‘the toughest press regulator in the western world’, a toughness that would manifest itself in rigorous investigations and, when appropriate, seven-figure fines.

Seven years on – seven years! – and no investigation has even been instigated nor even a ten-pound fine imposed.

Ramsay and Barnett demonstrate with admirable clarity that it was a con from day one, that the press executives who so carefully designed IPSO ensured that investigations and fines would never be more than window-dressing. By unpicking IPSO’s own paperwork line by line they show that even if it wanted to (and remember IPSO’s chair is an ex-Tory politician), the complaints body could not seriously hold a major news publisher to account, no matter what it did.

Meanwhile, through case studies, they also expose with great clarity, not just the failure but again the designed failure of IPSO to address discrimination – something the organisation itself has had to come clean about. The big newspaper companies have a code that, at first glance, appears to ban discriminatory journalism, but which is deliberately worded to be utterly unenforceable.

The new study runs to 78 pages. It is thorough and detailed and its conclusions about IPSO are devastating. Nobody, not the press itself nor its many apologists, is obliged to agree with it, but they are surely obliged to answer it with equal care and seriousness before they even think of repeating their nonsense about toughness and effectiveness.

And to repeat: this is not an arcane and obscure matter. Every day, innocent people suffer because an unaccountable press abuses them. Every day, press lies ignored by IPSO inject poison into our democracy. And thanks to the government’s ‘Online Safety Bill’, this is only going to get worse.