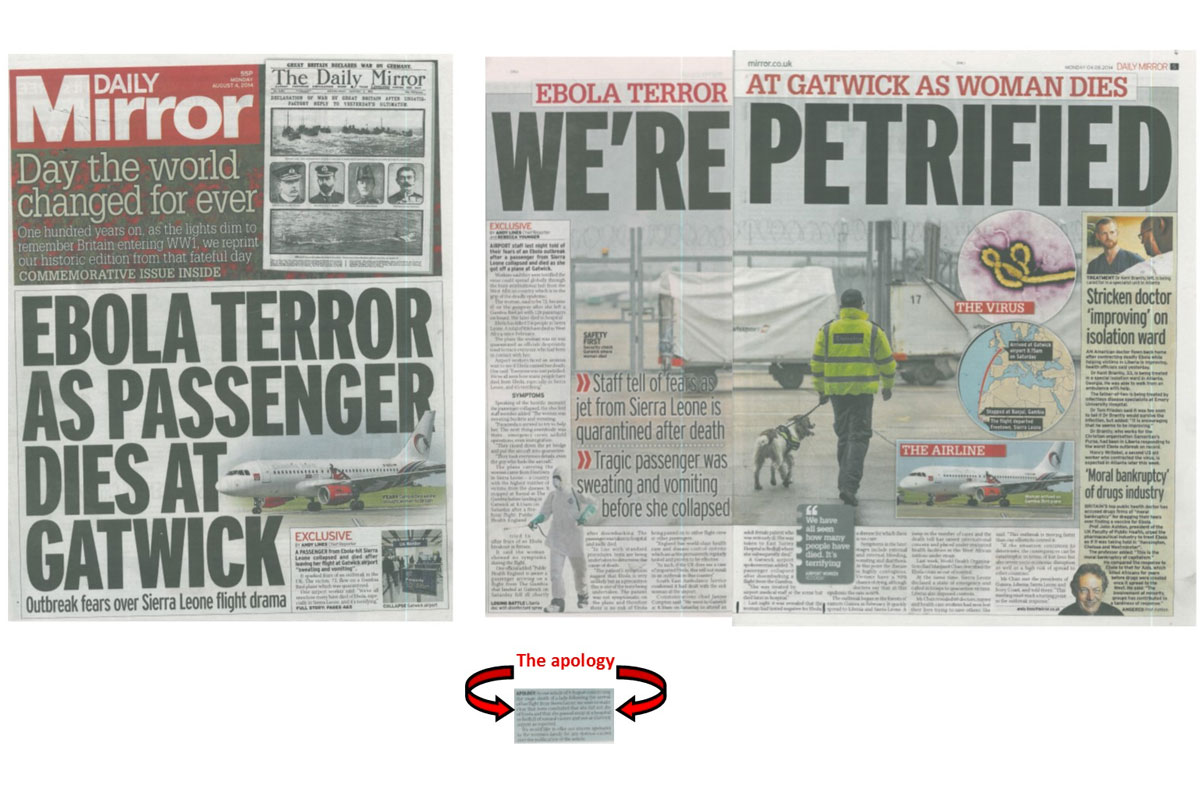 The Daily Mirror has apologised over a grossly inaccurate article published more than three months ago. The front page exclusive by Andy Lines, Chief Reporter, and Rebecca Younger published on 4 August ran with the giant font headline: ‘EBOLA TERROR AS PASSENGER DIES AT GATWICK.’

The article continued with a double-page spread across pages 4 and 5 with the banner ‘Ebola Terror At Gatwick as Woman Dies’ and ‘WE’RE PETRIFIED’ in giant font splashed across both pages.

The front-page bold introduction stated ‘A PASSENGER from Ebola-hit Sierra Leone collapsed and died after leaving her flight at Gatwick airport “sweating and vomiting”.’
Page 4 large letter pull-out quotes included: ‘Staff tell of fears as jet from Sierra Leone is quarantined after death’ and ‘Tragic passenger was sweating and vomiting before she collapsed’ and on page 5 in a quote attributed to an Airport worker: ‘We have all seen how many people have died. It’s terrifying’.
The first signs that the story was substantially incorrect and merely sensational came on the final page of the article on page 5, at paragraph 22: ‘Last night it was revealed that the woman had tested negative for Ebola, a disease for which there is no cure’. In fact, with quick access to the correct treatment, people can and do survive Ebola.

Scaremongering pictures added to the shameless hyperbole, with the front page carrying the picture of a Gambia bird aeroplane and a picture of UK border control. Inside there was a map of the plane route to reinforce the point that the plane came from a far-off place like Africa, a microscope view of the Ebola virus for any scientists who happened to be reading, a picture of a man in full protective clothing carrying a disinfectant spray gun, and a border force security man wearing a high visibility jacket and accompanied by a sniffer dog. What the sniffer dog was for is unclear.

Last week’s tiny apology on page 2 said: ‘In our article of 4 August concerning the tragic death of a lady following the arrival of her flight from Sierra Leone, we wish to make clear that tests concluded that she did not die of Ebola and that she passed away at a hospital in Redhill of natural causes and not at Gatwick airport as reported. We would like to offer our sincere apologies to the woman’s family for any distress caused over the publication of the article.’

This insensitive and sensational article was in clear breach of the Editor’s Code, Clause 1, Accuracy. It states that:

i) The Press must take care not to publish inaccurate, misleading or distorted information, including pictures.
The woman did not die from the Ebola virus and The Mirror knew this before the article was published. The most basic journalistic checks should have established that she did not die at Gatwick Airport.

ii) A significant inaccuracy, misleading statement or distortion once recognised must be corrected, promptly and with due prominence, and – where appropriate – an apology published. In cases involving the Regulator, prominence should be agreed with the Regulator in advance.
A three-inch square apology on page 2, more than three months after the event, does not satisfy the requirements set out in point ii. Newspapers have a responsibility to report accurately, for good reasons. Ebola is an extremely serious issue: the public want to be informed, not frightened by scare stories. There was no regard whatsoever to the poor woman who died or indeed her family. Her death was used by The Mirror to maximize newspaper sales in the most irresponsible way. If the new press regulator, IPSO, thinks this miniscule apology puts things right, the public should feel very afraid indeed.

So that was being reprimanded?
These red tops just get worse and if that is journalism it is a blight on the already rotting carcass of the profession.

Leveson has done nothing to change the disgusting excuse we have for journalism,if anything its worse now than before.