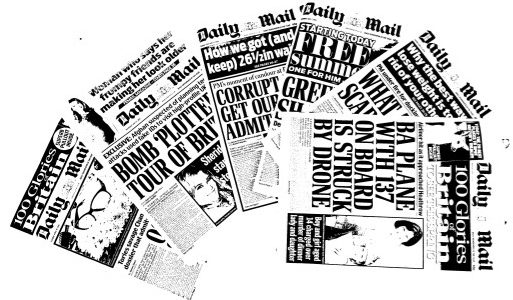 Several of these people gave evidence to the Leveson Inquiry. Some described how the intrusion was in some ways as bad as the original tragedy or bereavement, or that it made the trauma and grief much worse; others described the hammer-blow feeling when they discovered that there was no real remedy. The big newspapers and their sham regulator would have you believe that they’ve changed their ways, but they have not.

On 20 March this year, Louise James lost her partner, mother, sister, and two sons when their family car sank after sliding off a slipway in County Donegal in Ireland. One can only imagine the scale of her pain and grief.

Following the funerals, she was shocked to read an “exclusive interview”, apparently with her, in the Irish Mail on Sunday.  It was also carried in the UK edition of the Mail on Sunday.

We can only assume that Louise or a family friend complained as, on 3 April, the Irish MoS (which is regulated by the Press Council of Ireland) published this apology:

“Last Sunday, we published an article quoting from Louise James, who had lost her partner, mother, sister and two sons in the Buncrana tragedy.

We wish to make it clear that Louise understood that she was speaking to our reporter in a purely private capacity and had not consented to being interviewed. She did not wish to give interviews to any media outlets.

We are happy to make this clear and to apologise to Louise and her family for the upset cause.”

The publication of the story by the Mail on Sunday in England was clearly a breach of the IPSO Editors Code – a set of standards agreed by the industry itself (from a Committee chaired by Associated Newspapers Editor-in-Chief Paul Dacre).

In cases involving personal grief or shock, enquiries and approaches must be made with sympathy and discretion and publication handled sensitively. These provisions should not restrict the right to report legal proceedings

Case closed? Far from it.

On 4th April, the Belfast Telegraph reported that Louise had in fact been “duped” into speaking to a reporter, who had “infiltrated” the wake at the family home posing – with two children – as a well-wisher.

The family priest, Father Paddy O’Kane, is reported as saying that the reporter “pretended she was also a mother” and “began asking for photographs of her children with [the infant who survived]”. He described how other journalists “were hiding then taking photos of family members, and others were taking photos through the kitchen window.” He described how Louise “could not believe the journalist could stoop so low”, and that she has been left feeling “angry and hurt”. Indeed, Father O’Kane hit the nail on the head in saying that “It calls into question the ethics of journalism.”

The Mail on Sunday – which also carried the interview – did not carry the apology.

The Belfast Telegraph also reported its understanding that the family may lodge a complaint with IPSO, but as scores of victims have testified and as IPSO adjudications show, she is unlikely to get anything more than a tiny apology hidden away in an obscure corner, several weeks or months after the original article.

Can this really be fair? Is there really no other proper remedy?

The system is no different now than it was pre-Leveson. The Mail newspapers, known for breaching the Editors’ Code more than any other paper, with some the deepest pockets and the most expensive lawyers, can still get away with this behaviour scot-free.

That is why the current system of sham regulator, IPSO, controlled by the industry will never be acceptable.

It seems that the Mail has managed to rise from the sewers to get up to the level if the gutter press.

Absolutely disgusting. The press should be held account for any article that is published.

Please sort them out
Somehow I

Cameron and his cronies need to wake up and smell the coffee, they are going to feel the backlash of the public’s anger before much longer. It is blatantly obvious to anyone with a brain that hey don’r give a damn for the people who vote these obnoxious and greedy people into the houses of Parliament, where they are meant to serve their interests, but instead are ordered by the party whips to vote the way the party, (and there financial supporters want).
British Democracy is broken, we need to demand Proportional Representation NOW !

This is so despicable I don’t even know what to say. Surely they can be arrested for trespass or something.