New monthly summaries of ‘concluded complaints’ have appeared on the PCC website, as usual with no fanfare and no analysis to help the public understand the performance of the papers that the PCC ‘regulates’.

So once again we have done the job for the first quarter of 2014, and the picture is a familiar one. The paper breaching the Code of Practice most often is the Daily Mail, whose editor Paul Dacre chairs the committee that writes the Code.

Here is the tally of the PCC rulings where it is clear there has been an actual or ‘probable’ breach of the Editors’ Code in January, February and March 2014. 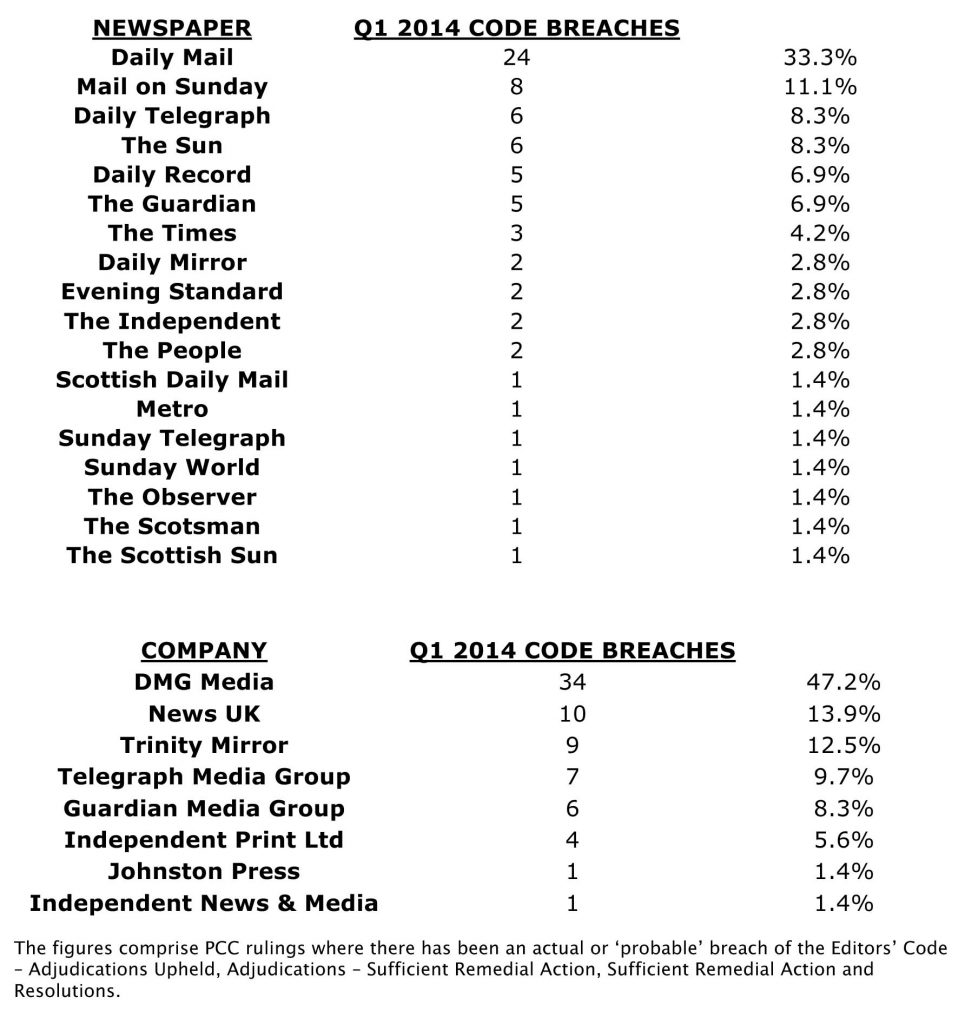 The Daily Mail tops the table by a country mile, with a third (33.3%) of all the breaches for national, Sunday and main regional newspapers.

It’s another familiar story when you examine the corporate results – the Daily Mail’s parent company has accounted for almost half of the breaches (47.2%) in the first three months of 2014, with News UK (13.9%) and Trinity Mirror taking third place with 12.5%.

And please remember two things about these figures.  First, no consequences flow from these cases for the newspapers or their journalists or editors: these are almost exclusively ‘mediated’ fudges of the kind the Leveson Report condemned.

And second, they undoubtedly represent only a fraction of newspaper wrongdoing, since relatively few people can now trust the PCC, which has been almost universally condemned and discredited.  It is certain that many complaints are simply not made because aggrieved people see no point.

Just as the PCC doesn’t publish league tables, so it rarely identifies the ‘most complained about’ stories, for fear of offending its paymasters and the editors that sit in judgment on the Editors’ Code Committee. It is clear, however, that one story generated a third of all the recorded complaints in Feb 2014: Richard Littlejohn’s inflammatory “Jolly Jihadi Boys’ Outing to Legoland” column in the Daily Mail.

Then, in March 2014, the public was appalled to see British newspapers – the Daily Mail, Daily Mirror and the Sun – intrude into the private grief of Mick Jagger following the tragic death of his partner L’Wren Scott. These stories triggered 63 complaints to the PCC, but as these were “third party” complaints (in other words, not from Jagger himself), the PCC are under no obligation to take the matter further with newspapers.

The PCC, you may recall, only reluctantly published their league table of the most complained about newspapers in 2013 after a dressing down from the Culture Select Committee – confirming our own earlier analysis and making a mockery of the Mail’s half-soaked damage limitation exercise.

UK Politicians Betray Victims of Press Abuse.
Since Lord Leveson’s recommendations for an independent body to replace the self-serving and incompetent PCC has slipped from the headlines, the Scottish and UK politicians all breathed an audible sigh of relief. No more cries of outrage has been heard from all those politicians who lined up in the Scottish and UK Parliament, egger to express their contempt for the unforgivable and unjustifiable intrusion into the private lives their constituents. Now those same politicians are happy to silently sit back and watch the newspaper moguls and their editors systematically dismantle the Cross-Party agreed Royal Charter and replace it with their own self-indulgent Royal Charter . It is painfully clear that all UK and Scottish political leaders have lost all interest in the pain and suffering their constituents have and in some cases still having to endure at the hands of unethical and malicious journalist and their editors. Where are the political voices of distain at the clear contempt the newspaper industry has shown towards the Cross-Party Royal Charter now the newspaper industry silently forge ahead with the same old system as the widely condemned and inept PCC. Yes, they will use another name, but be in no doubt there will be no fundamental change from the old journalist principle of, ” don’t let facts get in the way of good story and publish and be damned”!

The Daily Mail’s misinformation about ‘the new press watchdog’: comparing the paper’s selective defence of IPSO with reality | Hacked Offreply

[…] the Daily Mail – the newspaper exposed as being responsible for by far the greatest amount of definite or likely Standards Code breaches under…, despite its editor controlling the PCC’s Standards Code Committee – attacked John […]