Debate on whether a new law should be introduced, dubbed ‘Cliff’s Law’, has recently resurfaced.

This is in part due to the ‘Gatwick Drones’ coverage over the Christmas period, when a couple was, in effect, wrongly accused on the front page of two national newspapers of being involved in criminal activity after they were arrested on suspicion of being responsible for the Gatwick airport drone disruption. 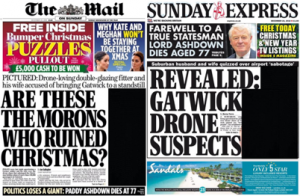 The couple were vilified and ‘revealed’ as the ‘morons who ruined Christmas’, yet they were later released without charge. They were totally innocent.

In July last year, Conservative MP Anna Soubry called for a new law to stop police suspects being named by the media until they have been charged, except in exceptional circumstances. Following Sir Cliff Richard’s successful privacy claim against the BBC, Soubry suggested that the law could be named ‘Cliff’s Law’.

Despite having never been charged, Sir Cliff was named by the BBC, and filming of the police raiding Sir Cliff’s home was broadcasted live. Cliff has described his ordeal in being named in the media without charge as being “hung out like live bait”.

Both Sir Cliff, and the couple arrested in December, were entirely exonerated of any wrongdoing, yet both had their reputations tarnished and privacy violated by media coverage after being identified.

As far as the press is concerned, the fundamental problem is the total absence of regulation across most of the newspaper industry.

Given that the innocent Gatwick couple were smeared nationally and on the front pages, one would expect that a competent regulator would require front page corrections. But these newspapers are members of the self-serving industry body IPSO.

As IPSO lacks both regulatory powers and inclination, the prospects of appropriate remedy are incredibly unlikely, meaning there is no deterrent from newspapers acting in this way time and again.

Several politicians want more protections for subjects before they are charged. ‘Cliff’s Law’ may go some way to achieving this, and Hacked Off have campaigned for further consideration of this matter as part of Leveson Part Two.

But, a competent regulator could resolve this problem without the need for further legislation. This would be done by ensuring that newspapers invading people’s privacy without any public interest justification face appropriate sanction, and that the victims of these intrusions have access to remedy.

On BBC Radio Surrey this morning, Hacked Off Director Kyle Taylor spoke on Cliff’s Law [2:26:44] and how essential an independent press regulator is to ensure the public’s protection. He said:

“If there was proper remedy and a truly independent regulator that you could raise an issue with if you had a problem with the press, then that would help to deter the press from publishing misleading information that gets away from actually the public interest. So regulation has to go hand in hand with Cliff’s Law.”

Ian Murray, Executive Director of the Society of Editors, was also interviewed on the programme, and claimed that reform would represent a knee-jerk reaction, which could jeopardize democracy.

Kyle Taylor has said in response,

“The Society of Editors suggest any type of responsible journalism standards is a slippery slope to living in a dictatorship. Quite the opposite. When the press spread false and misleading information they undermine the very free speech they portend to believe in. This doesn’t serve the public interest, it erodes it.”

Guilty until proved innocent seems to be the way this country is going and the media just love to destroy people’s lives to get a story whether true or not. However the police must be leaking information to the press or how would they know who to victimise and destroy. A lot of the press are just scum and don’t have any conscience, they are unable of putting themselves in other people’s shoes. It’s all about muck raking and ego. It is about time the press were arrested if they name people before they have even been arrested and convicted and then tried in court for slander. What a sad reflection of the human race a lot of reporters are and how can we hav confidence in the police if names are being released to the press.

Honestly, “will nobody rid me of these tiresome newspapers?” Why doesn’t somebody blow these bastards out of the water? That shit paul dacrre has left the field inasmuch as he appears to be not as visible nowadays but the daily mail is just as toxic. Honestly, who reads that pile of garbage? There really needs to be a proper revolution; cameron categorically promised us that Levison Part 2 would take place. But, guess what? This slimy tory government reneged and it has been binned. And these are the twats dealing with brexit. God, if there be any such thing, help us!

The problem is that these newspapers publish lies on a regular basis with impunity. They are never held to account in any substantial way. They have an agenda and influence significantly the public discourse and are no longer held to account. A good example is their lies about migrants and the ‘flood’ of people coming to the UK from Rumania and Bulgaria and claiming benefits. Such discourse had a significant impact upon the Brexit debate and subsequent referendum.

Irresponsible journalism requires strong laws to protect the innocent. The media look on fines as an acceptable expense. Jail sentences for editors and owners are the only deterrent.

This demonstrates beyond any reasonable doubt that the UK Media including the BBC, ITV, Sky and so called “Quality Newspapers e.g.The Times, The Telegraph and sadly even The Guardian” Have an absolute disregard for anything that does not fit with their twisted version of what is in “The National Interest” or their perception of what is good for the Elitist Regime ruling Britain in denial of fairness & justice!!

I am sickened by the fact that David Cameron’s promise to implement the Leveson Report has not happened. Therefore I feel a “Cliff’s Law” must be made to happen with a completely independent body regulating it. These cheap nasty newspapers must be prevented from
ruining people’s lives.

We need a Government with the backbone to tackle the press. We also need a new law that people ‘helping the keystone cops with their enquiries’ should NOT be named unless/until they are charged

Nobody, not even the Express and Mail editors, can reasonably claim ‘public interest’ for publishing these photos. Though they were suspects (Express headline), to suggest that they were morons and ruined christmas (Mail headline) added considerably to the damage that these two front pages did to those concerned.
Further, that they were named as suspects considering the lack of evidence and justified alibi known to Police early in this case shows that the Police simply wanted a suspect – any suspect – to alleviate the pressure that they were under.

‘Cliff’s Law’ is urgently needed. The media have once again shown that they cannot be trusted to hold back from humiliating innocent people and causing huge distress before the slightest evidence of any wrongdoing is available.

Conduct as described is plainly sub-professional and even emoral. However, it is no use complaining to MP’s as they depend on the media for their publicity. Second, gutter journalism sells, journalism needs sales or audiences, gutter journalism obtains both. Not flattering for the British public I’m afraid. That leaves the law to improve standards. The continuous pressure may eventually work. Hope so.

I’ve always wondered how the Press can get away with violating the established rule that a defendant is innocent until proved guilty.
This violation is the more serious when, as you report stated, the suspects were never charged, indicating that the Police were not satisfied with the evidence. There has been little news on the case since the release.

Innocent until proved guilty doesn’t seem to occur to these newspapers.
This couple deserve damages from the papers which made a horrific, thoughtless assumption and decided that the
police don’t make mistakes. In these days of electronic data transfer only a properly constituted regulator should have the final say on what steps are needed in each case. If the proper body were in place, it should be given the power to
adjudicate on cases in which IPSO have previously been involved. There is a real need for an independent body.

How true. Even partial truth is damaging to the public interest. The press/media must report honestly, responsibly and accountably.
The lack of research in reporting is hugely obvious to all. Damaging reputations, costing people their livelihood and relationships. Apologies, though necessary, don’t repair the damage done.

The Society of Editors’ self-serving comments are the reverse of the truth, in countries without effective protections individuals can be vilified and then persecuted and even killed for their opinions or beliefs.

It is a race to the bottom for all our shabby, incompetent organisations to join the Third World countries

This is minor, but in the second to last sentence in Kyle Taylor’s response it’s not ‘they portend too believe in’ shouldn’t it be ‘they pretend to believe’ in?