Recent comments by Kelvin MacKenzie in the Sun berating Hijab-wearing Fatima Manji for reporting on the Nice terrorist massacre for Channel Four news, provide us with an opportunity to review the community impact 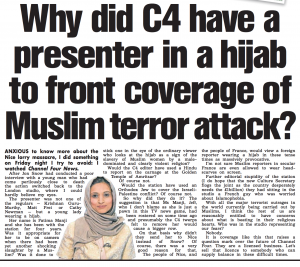 s of what is printed by some newspapers in our country. Defending our press and their freedom to print is essential and I am well acquainted with how Government control of the press damages and ultimately provides succour for dictatorships and autocratic regimes. As a refugee from the Idi Amin dictatorship and having fled because of a coup attempt in Kenya in 1983 which targeted minorities, I  have developed an intrinsic desire to defend a free press. Yet, there are real and deleterious impacts from what is printed, whether as fact or as opinion. The latter, it seems, provides an opt-out for editorial responsibility on many occasions.

Let us reflect back on what MacKenzie had said in the article in the Sun. He stated that, “he could hardly believe his eyes,” that the person presenting, “was not one of the regulars….but a young lady in a hijab.” He also asked whether it was, “appropriate for her to be on camera when there had been yet another shocking slaughter by a Muslim.” In essence, he was stating that a visibly Muslim woman should not have reported on the Nice attack because  a co-religionist was involved in the killings. Muslims, it seemed, could not do their journalistic duty because a fellow co-religionist had been involved in terrorism. The stain of the crime, it seems, fell on a British Muslim who chose to be visible and whose job it was to report on the Nice attack.

It is important to go back to Sir Brian’s Leveson’s Inquiry report of November 2012. Leveson’s Inquiry into the culture, practices and ethics of the press, (2012), said that, “the existence of a press with such significant power (to be a megaphone to shift public opinion), is a potential antidote to the dominance of big business and Government; but it also has potential to do great harm if not exercised with responsibility”. The report goes onto state that, “if someone in a position of moral or political authority makes a statement about race or gender, it isn’t simply that there will be a wider audience for that but also that the opinion comes with a greater degree of – with an imprimatur, or seems to, and that itself is problematic. That’s why positions of responsibility in society are very difficult, because you have to take a lot of care about what you say because people pay attention to it.” (Part B 2.7 page 78)

Furthermore the next statement in the Leveson report stated, “the press has the power to cultivate stereotypes, not just as a matter to the megaphone effect, but by cumulative effect.” (Part B 2.8 page 78) The report goes on to say, “one of the reasons we tolerate the fairly broad-ranging right of individual expression is that individual’s remarks are typically limited in their impact….but…this megaphone effect is a kind of culture-shaping effect….it exerts much greater influence and power on people, how they’re perceived by others, creating stereotypes or creating certain assumptions in society.” (Part B 2.8 page 78)

So let us go back to one of the most contentious statements in the MacKenzie article.

MacKenzie in his article commented that, “With all the major terrorist outrages in the world currently being carried out by Muslims, I think the rest of us are reasonably entitled to have concerns about what is beating in their religious hearts. Who was in the studio representing our fears?” IPSO’s ruling accepted the following suggestion that, “The newspaper argued that there was no prejudicial or pejorative reference to the complainant’s faith. It said that the column contained no description of her religion or beliefs using inflammatory language. Instead, the column formed part of a public debate about presenters wearing symbolic items on screen.”

Yet, IPSO has singularly failed to address the very basis of the statement from MacKenzie, that through the eyes of the average reader, it could easily be read as though all Muslims have some kind of terrorist sympathies because a co-religionist was involved in the murderous attacks in Nice. This, one of the most inflammatory of statements, is nothing if not prejudicial, yet it is singularly glossed over in the IPSO ruling. In fact, IPSO goes onto support the paper’s position that it was not attacking the newsreader, yet judging by this comment, the newsreader it seems is already tainted. It is as though they have to prove the alternative, that they are not in line with the emotions and thoughts of the Muslim who carried out the Nice murders, to be accepted and to do their job.

IPSO’s ruling has caused a significant downturn in confidence within Muslim communities and many others as to the role of IPSO in proving a genuine route to seek redress. Looking back at what was stated in the Leveson Report, ethics, it seems, has little to do with it when a Muslim news reader is questioned as to “what is beating in her religious heart” as though her loyalty and her integrity should be questioned because of people she has never met, known or would know.

So let us go back to what was quoted in the Leveson report and reflect on the megaphone impact of newspapers and the way that they can crystallise public opinion and in some instances, strengthen prejudices. If IPSO cannot see or acknowledge this element, nor acknowledge that calling into effect the loyalty, professionalism and integrity of a newsreader who happens to be Muslim because some terrorists are Muslim, then IPSO has a lot to learn. Either that, or we are back to the days of the Press Complaints Commission; toothless, useless and irrelevant as a route to seeking redress.

Fiyaz Mughal OBE FCMI FRSA is the Founder and Director of Tell MAMA who work to tackle anti-Muslim hatred, you can find out more about them here: http://tellmamauk.org/