The Daily Mail published Katy Davies’ tweet about an encounter at a coffee shop without her permission. Soon, the story was picked up by other outlets and she was subjected to harassment on Twitter and the comments sections of the stories online. Here Katy writes about her experience, and why a fair and effective regulatory system is important: 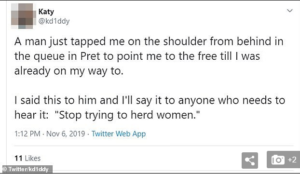 When my tongue-in-cheek tweet with 11 ‘likes’ made me a top story on the Mail Online, I used my knowledge of the media to take action. But those who are vulnerable cannot.

I’ve never really taken Twitter very seriously. A quick log-in can easily drag you, like a ceaseless tide, into anger, dismay and confusion (and that’s just when I read Michael Gove’s tweets).

Working in PR, I’ve tried to avoid being locked in an echo chamber, using the platform instead as a tool to seek broad news and opinion across the media. I also allow myself the luxury of following people who make me laugh, like the comedian Limmy, to break up the platform’s tendency to spiral into a cesspit.

I’ve never had a ‘viral tweet’ (I am not the story – the first rule of PR), I don’t have an elusive blue tick, and Stephen Fry doesn’t follow me. Yet in November 2019, I became a top story on the Mail Online, which received over 2000 comments, most of them trolls, thanks to a tweet I sent about my objection to a man unwantedly touching me in a central London Pret A Manger.

24 hours before becoming the story

The ‘story’ behind my now infamous tweet began when I was walking across the apocalyptic concourse of converging humanity – also known as Waterloo station. Feeling under the weather and between meetings, I popped to Pret A Manger to dose up with its Vitamin Volcano smoothie.

The Pret A Manger till layout is confusing at the best of times – there is an element of ducking and diving, with no immediate indication of which will be free next. Feeling below par, I spotted a free till through the haze, and began to walk towards it. However, at this exact moment, the man behind me decided to persistently and unwelcomly tap me on the shoulder and impatiently usher me to the free till I’d already spotted. ‘Go on! You’re next!’ There’s a free till over there!’, he said.

A stranger telling me what to do accompanied with unwanted touching is not my favourite experience. So I responded in haste:  “Thank you – but no need to herd me like cattle. Stop trying to herd women.” This was because in that moment, the way he acted made me feel that he had decided – on his watch – that I had taken up too much public space and was nothing more than an inconvenient barrier between him and his flat white.

When I left Pret, I remembered I’d used the word ‘herd’ in a sentence and it started to make me laugh. I reflected and  thought it was a funny tongue-in-cheek way to describe a serious point. And then, reader, I decided to tweet about it.

The tweet got 11 ‘likes’ from my followers. 11 Likes. So not viral and a bit of a damp squib. Note that my tweet also said ‘and anyone who needs to hear this’. That meant anyone – men or women, because yes – based on my personal experience – women can herd women too albeit less often.

At 5:30pm the next evening, I was a headline ‘top news’ news story on the Mail Online, the global face of a man-slamming movement of women across the world who all had tweeted about not wanting to be touched by strangers in public.

I found out thanks to a friend who also works in PR who’d seen it and sent me a screengrab. Imagine getting a whatsapp of your photos on the Mail Online with the blaring headline ‘Woman accuses man of trying to ‘HERD’ her after he tapped her on the shoulder in a coffee shop queue – as others slam strangers who ‘touch people they don’t know’.

In just over 24 hours, my tweet had gone from a momentary thought to a national news story. No journalist had been in contact with me prior to this, and my images had been used without consent. The Mail Online had even found a photo of me with a close friend, opening us up to the army of trolls pawing through the article’s copy before bashing at their keyboards with something hateful to say. The Mirror Online copied the story within hours, similarly using my imagery without consent. I knew more trolls would be swinging into action, so I rushed to make all my social media platforms private.

My phone started buzzing with notifications – I had messages from friends, colleagues, whatsapp groups (lets not forget the Twitter trolls) and in the flurry, I forgot to warn my mum not to read the comments, which she had done and found very upsetting. (I haven’t read any of them). Some friends were also in distress, as they’d seen my photo on the homepage before reading the headline and in shock, their first thought was that I was dead. My family were struggling to understand how the media could turn one tweet into a campaign of hate, and I struggled to provide any reassurance.

My first reaction was disappointment. I’ve worked in the media for nearly 10 years, and not much surprises me anymore. One of my first thoughts was that my PR career and skill set was built on a respect for the processes of journalism and media relations.  I’d flogged enough turkeys in my early days of PR to know when a story wasn’t a story and learned how to dig out stories in organisations or for those seeking a platform – and persuading the media to care.

In terms of the media landscape, I knew investment in investigative journalism was in decline, and in the thirst for online content social media was being used as a source for stories, but the bar was extremely low if my non-viral and arguably mundane tweet (I’ve done better) – the singular opinion of one woman -became a top “story” that the Mail Online that it published without my consent amidst the white noise of Brexit and the impending general election.

The following morning, after an almost sleepless night, I decided to email a trusted journalist at each title, who I’d worked with previously, that I knew could assist in getting my photos taken down, and they were removed pretty quickly. My photos are still on numerous syndication news sites, and I haven’t had the time or resources to deal with them yet. I accepted that the tweet was in the public domain – I still don’t accept it is news.

Women should be seen and not herded

There was a clear narrative and agenda that the Mail Online thought it could feed by giving its platform to my non-viral tweet.

It is yet another example of women being singled out – in my case, for having an opinion – and being exposed to trolls in the process. Online trolling sees women – particularly those who put their head above the parapet – like female MPs, CEOs in the charity sector and journalists – regularly targeted online.

There was no ethical consideration of the impact of throwing a woman to a troll audience by proactively placing my tweet in a toxic online media environment where my opinion would not be welcomed. I noted the irony of innocently tweeting about an issue of harassment in a public space – and then being singled out for no reason by these media outlets, putting me in harm’s way, exposing me to vile trolls and causing my friends and family distress.

It also highlights starkly how some reporters – who I’ve heard are often poorly paid and bullied – are made to trawl twitter to ‘report’ one person’s opinion as news with the sole purpose of whipping up a divisive, yet clickable and shareable content. I’m just ‘a woman’ in the story – not a public figurehead or celebrity – it didn’t even mention where I work.

I was a completely random victim of two media outlets that chose to abuse their position of power as online media platforms, utilising tactics to fuel an agenda that doesn’t serve journalism or the public interest. Whether their practices are the result of being sketchy or slapdash – something needs to change.

Hats off to Hacked Off

If I didn’t work in PR, I wouldn’t have had a clue who to speak to or where to go. I may also have read the comments. Just because I work in the media and have a hardened skin to how it operates, it doesn’t mean it’s OK for this to happen again to the next victims who aren’t equipped to deal with it.

This is how I realised why Hacked Off is such an important organisation.

I’ve decided to turn this experience into a fundraising opportunity for Hacked Off by producing a range of slogan beanie hats in Suffragette colours (purple and green)  plus soon to be added limited edition art prints (by Swedish artist Theres Bergman), inspired by the wording of my infamous tweet: ‘Stop trying to herd women’. Available on Etsy here, and the perfect Christmas gift, at least £2 from every purchase will go to Hacked Off, so it can continue its important work for victims of press abuse.

As we verge on a general election, party leaders should commit to press accountability. The Leveson inquiry recommends an agreed system of independent self-regulation along with restoring access to justice for the victims of press illegality. Until its implementation, vulnerable people will continue to be pawns in divisive news agendas. These outlets. spreading non-stories as ‘news’ for clicks, are affecting the rise of hatred and division in our society, and in doing so – irreparably damaging the reputation of journalism and its values.

Across the country, there are supporters of press reform standing for all parties. Help us elect them.

CLICK HERE to enter your postcode and find out if your local candidates support press reform and write to them to ask if they will commit to ensuring a better press for us all.

Ms. Katy Davies, in reference to your words, “It is yet another example of women being singled out – in my case, for having an opinion – and being exposed to trolls in the process”, it was YOU who singled women out with the words: “Stop trying to herd women”; and it was YOU who exposed yourself to the trolls who unsurprisingly targeted you. In this article you have repeated yourself about being a media professional so you can’t claim ignorance of trolls and their campaigns. Thus, that the Mail Online ran with this story was also your OWN fault.
I’m also unconvinced that your claim that your comment was “tongue-in-cheek” isn’t disingenuous. I think you realised that you’d made a mistake in publishing a feminist tweet that sought to turn one man’s rudeness into a feminists’ issue when, as you know as well as the rest of us, men get touched in the same unwanted way just as often as women.

A woman who agrees with Kate Davies.reply

With respect, I vehemently disagree with Mr. Rooksby. Women are *much more likely* to be touched by male strangers in public than men are likely to be touched by strangers of both genders. And Ms. Davies did not single women out with the words: “Stop trying to herd women.” She singles out men like you who have no clue what it is like being treated by male strangers in public as if they have some right to touch women whom they don’t know.