A huge thank you to almost 6,000 of you who wrote to the Government asking that the “Christchurch Call” pledge apply to newspapers and websites, alongside social media companies.

In New Zealand Prime Minister Jacinda Ardern’s speech at the G7 Paris summit she demanded that “we must also acknowledge that the traditional media have responsibilities with regard to this content, and governments must encourage them to act appropriately.”

It was our collective voices that highlighted the destructive role traditional media played in the wake of the Christchurch attacks and we corresponded directly with Prime Minister Arden’s office before this summit, sharing our concerns.

Our Prime Minister, Theresa May, is one of 18 global leaders who agreed to a set of commitments and ongoing collaboration, pledging to stop the internet from being used as a tool for terrorists and encourage “media outlets to apply ethical standards when depicting terrorist events online, to avoid amplifying terrorist and violent extremist content.”

Eight tech companies: Amazon, Daily Motion, Facebook, Google, Microsoft, Qwant, Twitter, and YouTube, also signed up to the ‘Christchurch Call’ – the next big step for us now is to lobby to get newspapers to sign up directly, following the Call’s explicit reference to “media outlets”.

When the Government capitulated to press barons and reneged on their commitments to implement the Leveson recommendations, they put us all in harm’s way. Now Theresa May has pledged to make meaningful change – we must hold her to it. The Government promised regulation to protect the public in 2013, now they must do it.

View and share our letter to New Zealand Prime Minister, Jacinda Arden.  Together, we must do all that we can to fight harmful content and hold government to its promises. 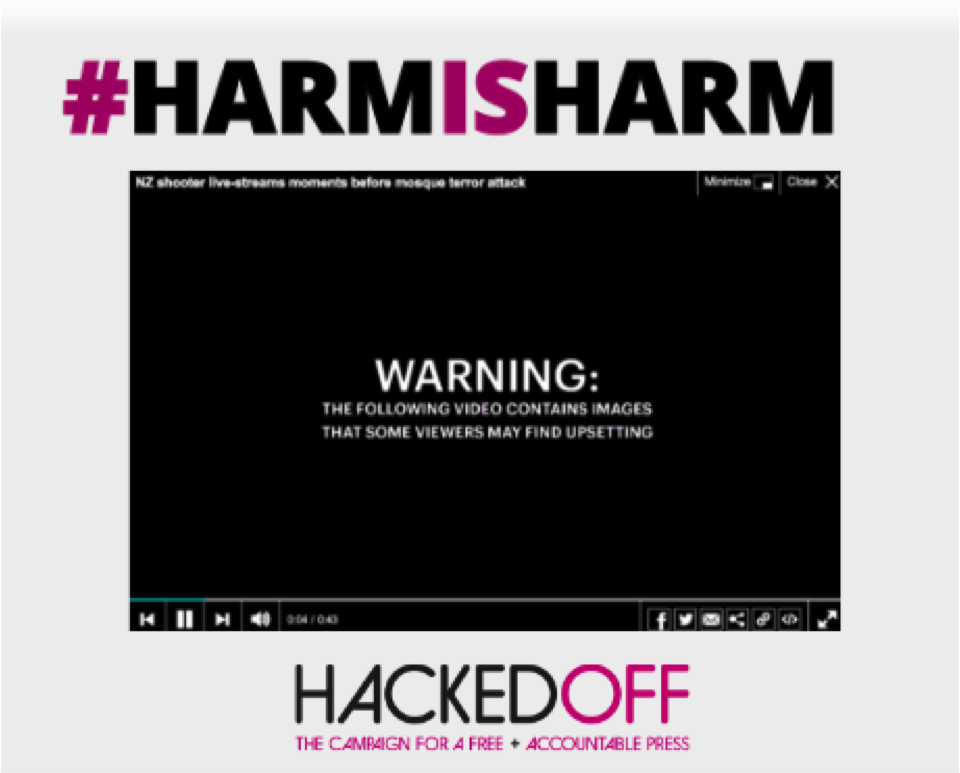 I’m still not sure what you are demanding be done! Are you talking about censoring the news? Or just the ‘nasty’ bits you don’t like? I see the NZ govt has already banned some coverage of Tarrant’s trial http://www.wsws.org/en/articles/2019/05/23/chri-m23.html . Is this what you want?

Yes, stop islamaphobic content that Western corporate/state media uses to demonize Muslims but are you saying that Tarrant’s trial shouldn’t be covered? None of your content actually spells out what you want.

I can categorically say that PM May has not upheld her promise. Media in Britain, especially in Scotland is dire.
Scotland’s politicians voice is marginalised by main stream media & TV. Misreporting is also common place. It & blatant reports falsehoods.
In England media promote right wing politicians, giving them favourable coverage. Promoting division & hate.
Scottish politicians subjected to cat calls & derision & filibustered in West Minister.
All media is owners are owned by Union supporters. Scotland can’t have its own media as West Minister refuses to devolve this power to Scotland. We are all grateful for social media to counteract main stream bias