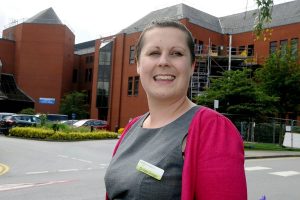 Read the excesses of parts of the British Press for long enough and one gets quite hardened to distortions, misreporting and twisting of the truth.

But every now and again something so horribly ugly and mean comes along that it stops you in your tracks.

So it is with one case involving Dr Kate Granger. She is the heroic woman medical registrar battling an incurable cancer who started the “Hello my name is…” campaign.

At the last count her campaign to improve patient experiences in the NHS had recorded 26 million Twitter impressions.

Dr Granger has become an international phenomenon. She decided to stop her own treatment when, as she put it “the costs started to outweigh the benefits” and went back to work in Wakefield looking after elderly patients while continuing to campaign for more person-centred care.

Her husband, Chris Pointon, has just extracted a sort of apology from The Daily Mail through a complaint to the Press Complaints Commission (PCC) for an appalling distortion of her speech to the NHS Confederation conference in June.

Under the headline “How NHS dehumanises patients, by doctor 32, who is dying of a rare form of cancer,” The Daily Mail ran a 750-word hatchet job that vilifies the NHS and grossly misrepresents what she said. It strings accurate but out-of-context snippets of the speech and uses them as ammunition to bash the health service.

The really odd thing about the report is that it completely misses out any mention of her campaign or that she is completely dedicated to the NHS.

To twist what somebody has to say that much is bad enough under any circumstances; but to do so when she has only weeks left to live and has dedicated her life to improving the NHS is almost unspeakable.

“The junior doctor who told her it had spread did not even look her in the eye,” reports The Mail.

“She also said that doctors often reduce patients to just their conditions,” it continues.

She did say both of those things but the Mail devotes nearly 25 per cent of the entire article quoting in the most minute detail what Dr Granger said in her address about that one encounter with a junior doctor.

Yet it does not mention at all another incident she recounts just as vividly when a consultant oncologist painstakingly reassessed her medication and then knelt down by her bed to tell her “Kate, you’re going to be OK”.

Nor does it explain that her purpose is to get that sort of best practice repeated routinely throughout the whole NHS; or how she says her experience as a patient has taught her greater compassion; or how she hopes her legacy will be an NHS that considers patients as people.

After her husband’s complaint The Mail eventually agreed to amend its online silo with a quite inadequate addition.

Instead of rerunning a correct report it added a few words from Rob Webster, chief executive of the NHS Confederation.

It is worth quoting part of this if only because without ploughing through the original outrage in the Mail Online database, you won’t find it.

“The report of Dr Kate Granger’s speech at the NHS Confederation Conference (Mail) omitted reference to her positive message, which is all about improving the NHS.

“Her ‘Hello, my name is …’ speech, made at the most important healthcare conference of the year, was one of the most powerful I’ve ever witnessed. Her insights into what we must treasure and what needs to change in the NHS are as important as the views of Simon Stevens and Jeremy Hunt.”

The PCC should surely insist on a more prominent correction, yet it never does, no matter how misleading the original report.

With the political conference season due to get underway within the next few weeks the reality is that at the start of yet another Parliamentary year there are no safeguards to protect speakers from similar carve ups – certainly IPSO, the successor to the spineless and discredited PCC, is unlikely to do any better.

And the inbuilt structural impotence of his new employer ought to cause a certain frustration to Mr Matt Tee, IPSO’s newly appointed chief executive as he was the Chief Operating Officer at the NHS Confederation at the time this happened.

You are assuming of course this is a newspaper, or maybe even a newspaper with standards of decency.

Paul Dacre should be hung.

Thanks Kate,
What a wonderful picture of care you paint. This would do so much good far beyond health care. Wishing you all the very best.
Kevin