Hacked Off has given evidence this week to the House of Lords Communications Committee as part of the committee’s inquiry into press regulation. Representing Hacked Off were Hugh Tomlinson QC, Chair of the Hacked Off board; Joan Smith, Executive Director and victim of phone hacking; and Dr Evan Harris, Associate Director.

In its evidence to the committee Hacked Off highlighted the ongoing problems of press abuse and intrusion, giving examples from the last few months showing breaches of privacy, intrusion into grief and sensational reporting of crime.

Joan Smith told the committee that many new victims of the press are coming forward, and that Hacked Off is dealing with people who are extremely distressed about how they have been treated. She said that the organisation is trying to offer them support, and is able to put them in touch with other victims so they no longer feel so alone. 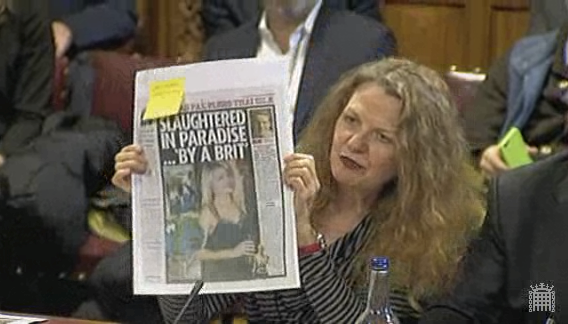 Showing committee members examples of recent cases, Joan said: “It is frankly astonishing how little the press have changed since the Leveson Inquiry.”

Hugh Tomlinson explained why Hacked Off supports Leveson’s position, saying: “We think Lord Justice Leveson had reached a balanced conclusion. He recognised the need for a self-regulatory system but also failures of self-regulation, so squared the circle by setting up what is in effect an independent auditing process.

“We are disappointed that the press have not only ignored the Leveson Inquiry but also the will of Parliament. The press presented their  plan to the Leveson Inquiry, he studied it very carefully, rejected it but they have gone ahead with it anyway.”

Hacked Off also highlighted the problems faced by journalists, many of whom feel bullied by management into acting in ways they believe to be inappropriate, but don’t feel able to speak. It was pointed out that both the old PCC and IPSO promised to implement a whistle-blowers’ hotline for concerned journalists, but nothing has been set up.

Dr Evan Harris said: “Journalists cannot get confidential advice from Ipso. We don’t think Ipso is serious about what it said it would do.”

1. Hacked Off was established in 2011 and campaigns for a free and accountable press. Hacked Off works closely with victims of press abuses but is open to all. Hacked Off is not affiliated to any political party.

2. More information on Hacked Off can be found at www.hackinginquiry.org or https://www.facebook.com/hackinginquiry

3. The Committee’s short inquiry intends to investigate the current state of play for press regulation, following the publication of the Leveson report in 2012, the agreement of a Royal Charter on the self-regulation of the press and the closure of the Press Complaints Commission in September last year.

How many have signed up to IPSO – 69 as Alan Moses stated at the select committee evidence session or 96 that Paul Vickers claimed?

I see Sky have announced they are to launch a mobile phone service… anyone else find the irony of this utterly hilarious??