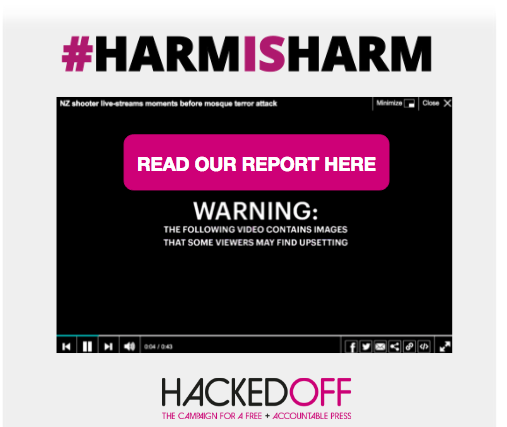 Some media companies propagated footage from the Christchurch attack to, potentially, a far greater audience than those who saw the attack through Facebook.  It is likely that more than a million people had access to edited footage of the terrorist’s self-recorded attack through websites of The Sun, the Mirror and the Daily Mail.  The Mail even uploaded the killer’s white supremacist manifesto.

Now, New Zealand Prime Minister Jacinda Arden and President of France Emmanuel Macron are organising a gathering of world leaders on May 15th, to launch the “Christchurch Call” – a pledge to fight terrorists’ use of online media to share their vile propaganda.

Hacked Off’s analysis shows that when it comes to that pledge, social media is only one part of the picture.

Newspapers, websites and other news publishers share responsibility for fighting the spread of terrorist propaganda.  The decision of The Sun, Mail and Mirror to publish edited footage of the gunman’s attack was unacceptable.

Tell the Secretary of State:

Independent media regulation MUST be part of response to Christchurch Call