Do we trust the press? At the height of the Covid-19 crisis the question is timely, both because the public desperately needs reliable information and because the government is giving handouts to selected news publishers on the grounds that they perform a public service.

Ministers and their industry friends are in no doubt about the answer. Michael Gove (a former newspaper journalist) recently called newspapers ‘a trusted voice’.

Meanwhile the umbrella body of the corporate press, the News Media Association (NMA), regularly draws a contrast between its own ‘trusted news brands’ and ‘social media and less reliable online sources’.

But where is their evidence? Polls over the years have consistently shown high levels of distrust in national newspapers and their journalists, and in particular the tabloids. Has something changed recently? Has the current crisis turned things around in a way that justifies the government’s and the NMA’s assertions?

The evidence of four recent polls by three different organisations tells us very clearly that the answer is no.

Look first at this YouGov poll, conducted for Sky News on 20/21 April. 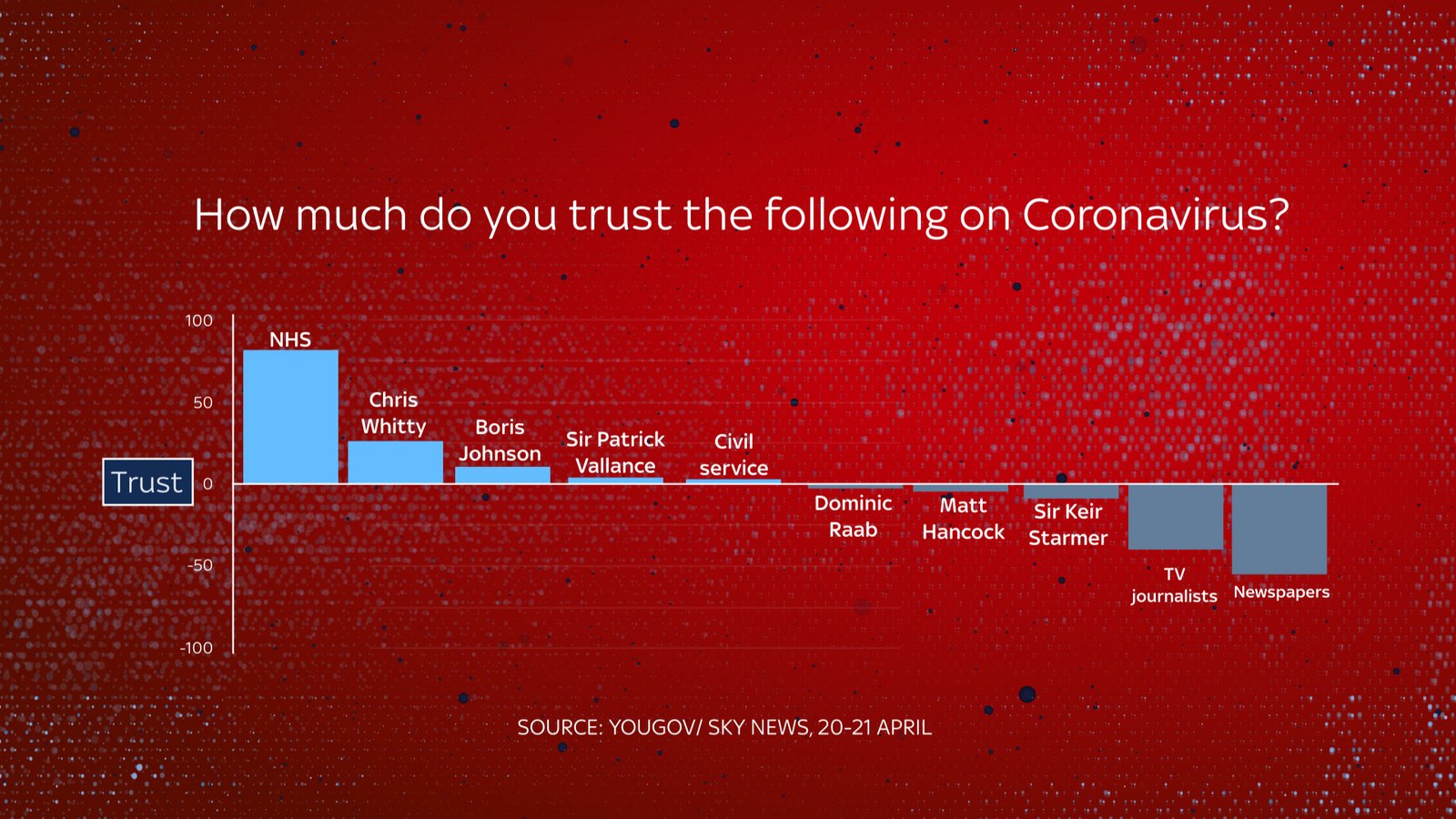 This is how Sky summarised it:

That was the second YouGov poll on this subject in a few weeks.

This was the result: 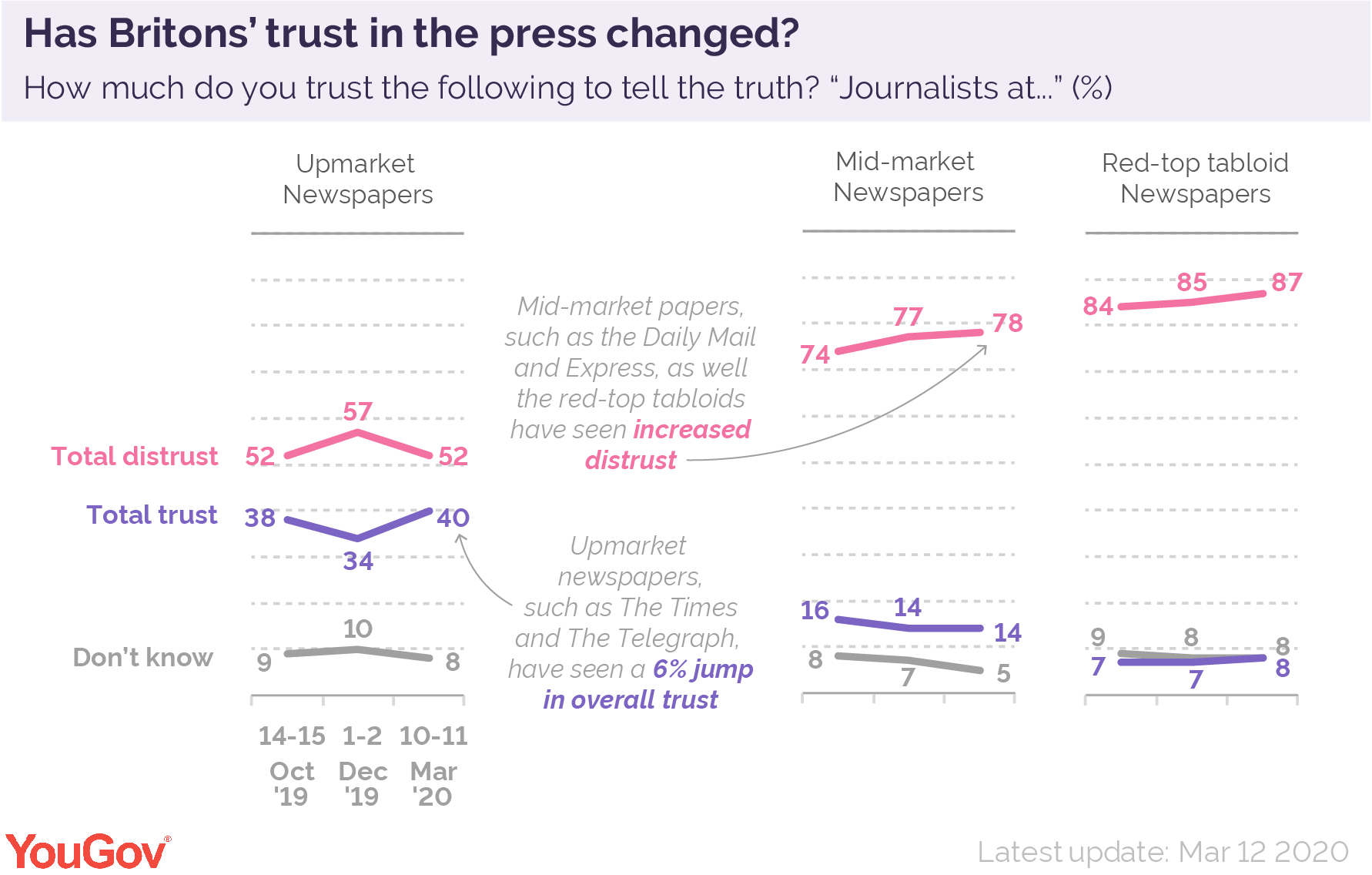 While YouGov’s commentary in the graphic highlights a rise in total trust in ‘upmarket newspapers’ from 34 per cent to 40 per cent, even in that sector the balance of trust and distrust remained negative. And the rest of the data present a catastrophic picture for the Mail, Express, Sun and Mirror. Distrust outweighs trust overwhelmingly and is rising, and just 8 per cent of respondents say they would trust a red-top journalist to tell the truth.

There appeared to be better news for newspaper journalists from Ofcom, the broadcast regulator, which has been tracking trust during the Covid-19 crisis.

Across four weeks of results, Ofcom found net positive trust of around 75 per cent for all the leading news broadcasters – that’s the number you get when you subtract the distrust figures from the trust figures. Those are very good figures.

For ‘printed newspapers’ Ofcom reported a positive figure of 56 per cent and for ‘online newspapers’ the figure was 44 per cent. Some way short of the level of trust in the broadcasters, but still apparently a strong signal of public trust, and very different from YouGov’s findings.

These Ofcom figures, however, are not what they seem, because only people who said they got information on the pandemic from newspapers were asked whether they trusted newspapers. The views of the 56 per cent of respondents who don’t read newspapers in print or online were simply not taken into account – and we can assume that many of them don’t read them because they don’t trust them. So the Ofcom figure only tells us that among the minority of people who choose to get information from newspapers, a majority trust newspapers. Which is hardly surprising.

In reality only 8 per cent of all of Ofcom’s 8,620 (the cumulative total, across weeks 1-4) respondents actually told interviewers that, on balance, they trusted print newspapers, and only 13 per cent said they trusted online papers, but these figures are not a true picture either because so many people were simply not asked the question.

And even within its own narrow confines the Ofcom poll tends to mislead, because it lumps all newspapers together. So the big sellers, the Mail and the Sun, are classed alongside the ‘upmarket’ titles and regional and local papers, all of which tend to score much higher for trust. The effect is to flatter the tabloids.

It is worth noting, too, that YouGov has been asking about trust in journalists for some years, and its most recent findings are entirely consistent with the more long-term picture in which trust in red-top tabloids, for example, has been hovering around 10 per cent since at least 2010.

And there is one more survey. This one comes from the PR firm Kekst-CNC, which polled in four countries – UK, US, Germany and Sweden – at the beginning of April.  It asked whether the recent activities of various ‘sectors’ had increased or decreased confidence, and the graphic below shows the result.

‘Media’ is circled on the far right, with the UK media featured in blue.

The ‘net effect on confidence’ of the performance of the UK media during the crisis, according to Kekst-CNC, was minus 21 per cent, the joint worst outcome (alongside Swedish media) across 11 sectors in four countries.

It may also be worth taking note here of a less scientific online poll conducted by the trade journal Press Gazette, whose readers are predominantly journalists. Asked ‘do you think journalists have done a good job of holding the Government to account during the daily UK Covid-19 press briefings?’, 70 per cent of the 1,020 people who responded said no.

The polls make it very clear that ministers and the NMA cannot justify saying the corporate press is trusted. On the contrary, the evidence tells us that nothing has changed in a decade and that public distrust in national newspaper journalism remains alarmingly high, especially where it concerns the biggest and richest brands – the Mail and the Sun.

Finally, watch out for a sleight of hand. When ministers and press bosses talk about the trusted press it is often in contrast with ‘social media’ – one of the few sectors that usually shows up in surveys as even less trusted than national newspapers. So by reminding you of the iniquities of social media they are seeking to make the press seem relatively innocent.

But this contrast is false, because national titles such as the Mail and the Sun are not distinct from social media; they are a very big part of social media and a big part of the reason social media are distrusted. Day after day and hour after hour they pump out on to Twitter and Facebook their often distorted and dishonest output, in the effort to drive clickbait revenues that are increasingly important to them. So if people distrust social media, and they do, the corporate press is one of the main reasons.