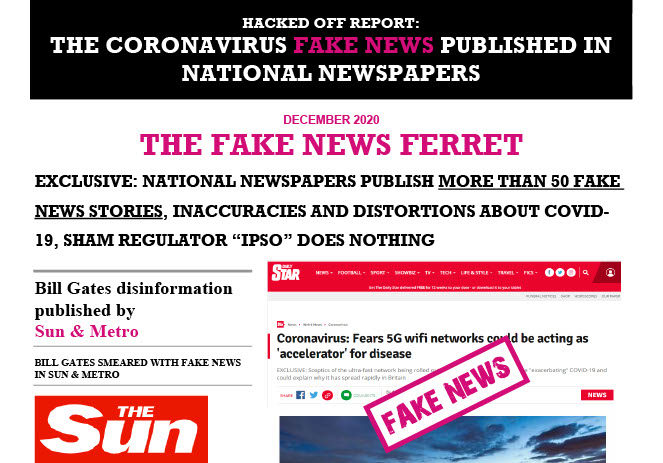 A free and accountable press is never more important than at times of national crisis.

Yet throughout the COVID-19 pandemic some newspapers have been guilty of publishing serious disinformation, or “fake news”, alongside multiple distortions.

Whether false information about the severity of the virus, fictitious stories about miracle cures, or simply the stuff of conspiracy theories, some newspapers have spewed out the same discredited and dangerous “fake news” which has appeared on social media platforms.

The coronavirus pandemic has exposed a lack of regard for accuracy and proper editorial review at many of the UK’s most-read newspapers, with titles frequently churning out stories about Coronavirus which were seriously and recklessly inaccurate, misleading, or untrue.

This is possible because, unlike every other major industry in the UK, the press remains unregulated. IPSO, the complaints-handler controlled by newspaper executives – has not ordered a single investigation in the six years since it was established.

The consequences of this are damaging for the public, who are fed disinformation and have no protection from press abuse.

As long as press executives persist with IPSO, we won’t get it.

The vaccine rollout is threatened by press disinformation.

In 1998, Andrew Wakefield’s flawed study into the MMR jab and autism was published.

Over the following years newspapers latched onto the study’s incorrect findings; giving them excessive coverage and credibility.  This allowed the falsehood that the vaccine led to autism to take hold in public understanding.

We cannot allow the same to happen with COVID.

For many, Coronavirus is a dangerous illness.  A successful rollout of tested vaccinations is critical to the safety of people most at risk from becoming seriously ill from the virus.

That’s why we’ve launched an open letter to newspaper editors, urging them to stick to the facts on the COVID vaccine coverage.  You can add your name below.

Press coverage of the flawed 1998 study into the MMR vaccine and autism caused public panic, confusion, and put children’s health at risk.

Instead of making your journalism accountable, you remain outside any independent form of regulation.  This leaves the public exposed to the inaccuracies and conspiracy theories you choose to publish and propagate.

Conspiracy theories about COVID vaccinations published to your millions of readers risk undermining the effectiveness of the vaccine rollout – putting thousands of lives at risk.

For the safety of the public, and those most at risk of serious illness, we urge you to keep your reporting on COVID vaccines accurate, evidenced, and conspiracy-free.

With the MMR/Autism disinformation campaign – based on fear – why do many parts of the press continue to create fear about Autism? An extreme of human variation, disabling for many – yet many of the greatest minds in history have been autistic. Nothing to stop the press abusing autistic people – no protections at all. The presses disinformation campaign spreads from topic to topic like a mutating hydra. Keep up the great work, Hacked Off!