Have we learnt nothing from press coverage  of the Covid-19 pandemic? Jamie Wareham writes. 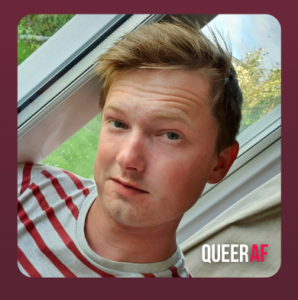 Monkey pox headlines focussing on gay and bi men are undermining the public health response. They’re just another example of one of the of one of the media’s cruellest profit drivers.

History rarely repeats, but it often rhymes. Just like with the COVID, you have to be careful comparing pandemics because of the nuances and implications of each virus.

But, the false media portrayal that frames Monkey pox as mostly a gay and bi men’s issue feels all too familiar.

There have been so many poor media portrayals that the UN said very early on in this growing issue, that the media was reinforcing racist and homophobic stigmas. Warning that focusing on one community like this would detrimentally impact the public health response.

Despite the warning, we’ve seen continued headlines with emotionally charged language like “super spreader” about gay pride events or framing Grindr sexual health advice as “alerts” that are not unusual on the app.

Its allowed divisive anti-LGBTQIA+ voices and divisive gender-critical groups like ‘LGB alliance’, which purports to support the community, to capitalise on the headlines.

Without expertise in the area, they called for the closure of saunas. The move only served to ramp up the false narrative, stealing attention away from what’s needed. As Public health researcher David Bath told openDemocracy: “It’s important that public health policy is proportionate, informed by experts, and done in consultation with the communities it will affect.”

Monkey pox is an issue for all of us. Just like HIV and COVID-19 are.

Many sexual health experts have explained that there is simply a higher proportion of gay men in the numbers because, given our community’s history with HIV, we’re much more likely to engage with sexual health clinics.

And yet, because a pocket of gay and bi+ men across the globe have been caught up in outbreaks, one linked to a pride event, the media has focused on them.

This despite the virus being endemic in some central African countries for years, and among straight people here in the UK too.

It’s an editorial choice to focus attention here when there are broader concerns at play.

Like many topics that frame marginalised communities as the issue, it’s driven by the worst instincts of a media addicted to ‘culture wars’ and rage clicks.

They’ve learned nothing drives clicks like pinning a problem on a community, writing about it repeatedly to compound the concept – and then cash in on the rage it inspires. They do this with impunity, spreading unsourced conspiracy theories to accelerate this.

If you’re told something enough times, your brain is hard-wired to remember it. It’s why even the most well-intentioned headlines that repeat the myth, instead of leading with the truth, compound the issue.

These headlines are more than just profiteering from clicks. They are undermining the public health response.

Many have long wondered whether, if HIV had been noticed in straight communities first would the response have been different?

For those who lived through the crisis and those of us who have learned about it growing up in the community, it remains so clear that as LGBTQ Journalism Network founder Sophie Perry puts it HIV became “a convenient solution to an inconvenient population.”

Media portrayals about gay and bi men with Monkey pox rhyme with everything we’ve seen before.

The journalistic principles of the fourth estate get ditched in an instant by a UK press that doesn’t have proper regulation. The recommendations made by Leveson or in IMPRESS, the independent regulator’s code would end press tactics that throw marginalised communities under a bus to drive profits.

It would give us the kind of journalism we deserve, that helps to protect us, not divide us, in a public health crisis.

Jamie Wareham is the founder of QueerAF, a new platform and the only LGBTQIA+ outlet in the UK that’s regulated by IMPRESS. Skip the doom scrolling, and join us to support queer creatives.

Want to understand the LGBTQIA+ news? Each week Jamie writes the QueerAF newsletter which explains the headlines.