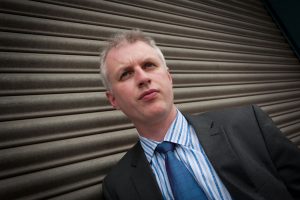 A man who appeared in an iconic picture of the 7/7 bombings says he has accepted press intrusion into his life, six years after the event that pushed him into the public eye.

Paul Dadge, a former fire fighter, was photographed running out of Edgware Road station with Davinia Douglass, who suffered severe facial injuries and was clutching a surgical burns mask, on 7 July 2005.

He found out the News of the World had hacked into his voicemails last year and speculated that there was a “level of desperation” to link him with Douglass in the aftermath of the attack.

He described being “filled with paranoia” after receiving an email from the Metropolitan Police, warning victims they may have been targeted by the tabloid.

He told Hacked Off: “There was a feeding frenzy from the press over whether 7/7 victims had been hacked. In the end it turned out to be true”.

He said: “It’s a good thing that others have received a level of redress from News International. We were a very small club, now we’re much bigger group of people.

“It’s a bit more high profile, you’ve got some heavy weights there. But it’s about people being able to seek redress.”

He added: “Today there was a big list of payments but I think it should be private. I’d rather have kept the fact I’d received a settlement out of the press and got on with my life.

“Last year would I have guessed I’d be embroiled in all of this? Probably not. Hopefully the buck now comes to end.”

Dadge said talking to journalists after the bombing became more “traumatic” than the event itself.

He said: “It was literally 24 hours a day for a week. Eventually, I was emotionally drained.

“The day after the bombings I was aware that my photo was on the majority of UK newspaper front pages and around the world. I knew I was going to have to confront the press at some point.

“I made a conscious decision that I would speak to them and I did give a lot of journalists my mobile number. It comes in peaks and tails off, but I still receive, on average, one phone call a week.”

He added: “One day you’re walking down the road and you’re a nobody and the next you’re splashed across the newspapers – it’s a roller-coaster ride. I’ve accepted after six years that it’s a part of my life.”