In a recently published book, A Free and Regulated Press, Hacked Off board member and Professor of Law at the University of Leeds, Paul Wragg, asks why newspapers are not regulated on a compulsory basis, as broadcasters are. 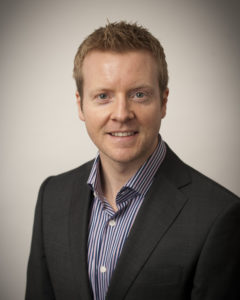 A Free and Regulated Press

All broadcast journalism, in the UK, (including the BBC) is regulated by ofcom. Broadcasters cannot opt out of this regulatory scheme. They cannot disregard adverse adjudications when they breach the rules. They cannot choose which rules they will comply with and which they will conveniently ignore. ofcom’s sanctions are real and meaningful. Fines will be issued against serial offenders and in respect of serious breaches. Regulatory rebukes are not empty promises; they have serious repercussions if ignored. 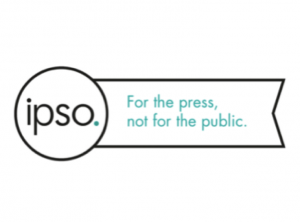 Print journalism is not subject to mandatory regulation. Instead, it operates within a system of self-regulation in which the industry is largely accountable to itself. Whereas the press’s preferred regulator, ipso, attracts the larger market share of membership compared to impress, the UK’s only recognised press regulator, its constitution does not adhere to all of the recommendations that Lord Justice Leveson made in his report in 2012, following his inquiry into press ethics and practices. Notably, and despite promises to the contrary, ipso does not reserve to itself the power to fine members for serious or systematic breaches of its code of conduct but, instead, applies the much higher threshold that breaches must be both serious AND systematic before it will consider fining members. Further, clause 67 of its agreement with members states that no fine will be imposed unless the breach is ‘sufficiently serious’ and even then, only after a hearing has been conducted first. The purpose of this hearing is described in entirely opaque terms:

Sir Joseph Pilling’s external review of ipso found this high threshold to be important so as to preserve the principle of press freedom (no explanation is provided, though).

What he did not recognise, but the rest of us see clearly, is that this high threshold suits both ipso and the press industry. Given that membership of ipso is entirely voluntary, and that its 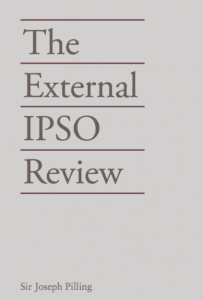 credibility as a regulator depends upon it retaining a critical mass of major titles (The Guardian, The Independent, and the Financial Times are not ipso members), it is heavily disincentivised from penalising newspapers too readily, or at all, for, as it discovered in its previous incarnation, as the PCC, disgruntled publishers are likely to leave.

Meanwhile, as long as constant breaches of the code are met by words alone and not real consequences, it suits the mainstream press to belong to ipso. For the collapse of ipso would provide strong political grounds for a fresh public inquiry into press ethics and the promise of tougher measures (albeit there is little chance of that occurring whilst the present government is in power).

Nevertheless, we should be clear that underneath the rugged finery of high-brow free speech principle, lies something delicate and fairly insubstantial covering the grim reality of a press industry that pretends to be cowed by the threat of heavy financial sanctions from a regulator too intimidated to issue them.

Given the constant, serious breaches of the code, evidenced in both court proceedings (of which, Megan Markle’s triumph is notable but not exceptional) and adverse ipso adjudications, we have reached the point, surely, where the sort of mandatory regulation that Leveson had in mind is both the last and only resort available to us if we are serious about tackling errant press behaviour.

To those (few?) that maintain the press deserves ‘one last chance’, I would say that the press has occupied the ‘last chance saloon’ since at least 1990, if not 1949, and that the prospect of self-rehabilitation has long since lost all credibility. Mandatory independent regulation is the only way to break the agonisingly cyclical public examination of press abuse in which, every ten years or so, government inquiry ends with sheepish pleas for forgiveness by the press, followed by cosmetic changes to its regulatory regime, before, soon afterwards, the repentance is gone, the conceitedness returns, and all the old mistakes are repeated, and some new ones for good measure.

That said, the use of fines, as the ultimate sanction, strike me as undesirable. I would much prefer to see the regulator awarding compensation to victims of press abuse in cases of serious breach (systematic breaches are a different matter). Admittedly, this cannot happen whilst ipso remains the principal regulator. Its membership contract, at clause 5.5, reassures members that it will never implement a compensation scheme: ‘for the avoidance of doubt the Regulator shall have no power to require [its members] to make any financial payment under the Regulations to any third party’.

Does compensation for serious breach of the code represent an unwarranted interference with press freedom? The short answer is no. The longer answer is also no. We should remember that ipso is not responsible for the code of conduct that it enforces. It is, instead, the Editors’ Code Committee, on which ten serving editors sit (alongside three lay members as well as ipso’s Chair and Chief Executive), that determines the code. This independence, Sir Joseph Pilling found, was vital to safeguarding press freedom:

‘Pretty well everyone from the industry believes that the Code’s effectiveness depends on its being, and being seen to be, principally the responsibility of editors who know the business and have a working lifetime of experience of considering when and why the freedom of the press should be curtailed.’

This is an intriguing sentiment, for ipso’s code of conduct, (as well as impress’s that matter), mirrors or otherwise mimics the same limitations on speech that we find in the English and Welsh law. Thus, this mysterious reference to some secret language known only to practising editors is, I’m afraid, pure alchemy. These concessions are not editorial generosity, they are legal obligations.

Nevertheless, if the press accepts that the limits on certain speech and activity contained with the ipso code of conduct do not undermine press freedom and if we bear in mind that the code is equivalent or otherwise compatible with the law, then the claim that enforcement of the code through mandatory independent regulation somehow threatens or undermine press freedom is entirely nonsensical.

Either the press accepts that its self-written code of conduct is capable of mandatory enforcement through a body like ipso without damage to press freedom. Or it lied to the public, and continues to do so, when it said that serious or systematic breaches of the code would no longer go unpunished. One of these propositions is true; it can’t be both.