More than 60 days on from the EU referendum and some BREXIT-backing newspapers are still publishing inaccurate and misleading information on the impact of the referendum result. During the EU referendum campaign, exaggerated and false claims were made by both ‘Leave’ and ‘Remain’ campaigns. And whilst newspapers are free to be partisan, the public expect newspapers to critically analyse political claims and ‘seek out the truth’, or at the very least not to publish false factual claims. But in too many cases, the newspapers failed to live up to these standards. Instead, they repeated the claims of their preferred side without questioning them and in a number of cases, made their own claims too – a number of which should have been corrected (although only few were).

Of all the national papers signed up to IPSO, only two supported ‘Remain’ (the Mirror and the Times). All of the others supported ‘Leave’. As a result, the majority of inaccurate and misleading claims, in IPSO newspapers, are associated with BREXIT-backing papers. Here are some of the worst offenders from July.

The Sun: “Flippin’ Bankers”
On 20 July 2016 the Sun had a story on page 4 with the headline “Flippin’ Bankers; After Brexit scare stories, IMF now says UK’s OK” which began ‘World bankers did a U-turn yesterday by saying Britain’s economy will be OK after all.’

The article is based on an IMF Press Conference on the release of the organisation’s July World Economic Outlook update – actually entitled: “Uncertainty in the Aftermath of the U.K. Referendum.”  As the transcript of the press conference shows, the IMF did not, at any point, say that the British Economy was “OK”

‘The Financial markets have proven resilient in the wake of the referendum. The reaction has been reassuring.”

Although he did, indeed, utter the first sentence as part of his opening statement, he did not then go on to say the second sentence.  Rather, in response to a question as to why the IMF had chosen a fairly benign Brexit scenario, he replied

“Well, the market reaction has certainly been reassuring in that markets remained orderly,”

But he went on to say, as part of the same answer

“With less than four weeks of data though, it is hard to tell what the ultimate outcome is going to be, and negotiations have not started. Article 50 has not been triggered, so there’s a lot of uncertainty.”

In other words, the IMF’s position remained that the impact of Brexit is “uncertain”.  There has been no “U-turn”.  The Sun’s piece is clearly a distortion and a breach of clause 1 of the Editors’ Code. IPSO has done nothing. 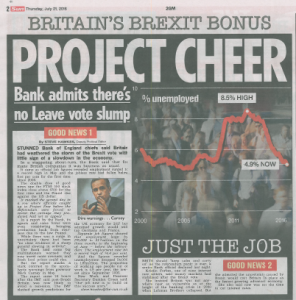 The Sun: “Project Cheer”
On 21 July 2016, the Sun had a story on page 2 headlined, “Project Cheer Britain’s Brexit bonus as Bank of England admits there was NO slump after Leave vote”.  It told readers

“STUNNED Bank of England chiefs said Britain had weathered the storm of the Brexit vote with little sign of a slowdown in the economy.

In a staggering about-turn, the Bank said that for many British companies it was business as usual.

But this was not what the Bank had said.  In its  summary of business conditions for July it made it clear that

“business uncertainty has risen markedly” and that “Many firms had only just begun to formulate new business strategies in response to the vote and, for the time being, were seeking to maintain ‘business as usual’ (emphasis added).”

In other words, the true position is the reverse of that advanced by The Sun: because companies had not prepared for a BREXIT vote they had no option but to ‘seek to maintain business as usual’.   There was no “about turn” by the Bank of England, “staggering” or otherwise.

This story is inaccurate, misleading and distorted – in clear breach of clause 1 of the Editor’s Code. IPSO have done nothing 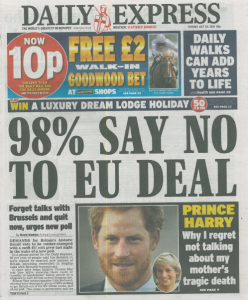 Daily Express – 98% say no to EU deal
On 26 July 2016, the Daily Express led on its front page with a story with the headline “98% say No to EU deal: Forget talks with Brussels and quit now, urges new poll”.  The implication is that the Express is giving the result of an opinion poll – of a representative selection of members of the public, randomly selected by a polling company.  In fact, the “poll” was of 3548 Express readers who responded to a ‘vote now’ online “poll”.

The Express frequently publishes these spurious “polls” of its own readers, which have in the past produced such headlines as “92% want to quite the EU” (the final result was actually 51.9% Leave) and “70% say we must ban new migrants”.

The inaccurate and misleading reporting of the referendum and its impact is clearly systemic. Is the watchdog even watching? IPSO is turning a blind eye.