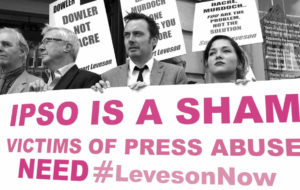 IPSO have today announced that publishers have renewed their membership of IPSO for a further five years.

The complaints-handler, which does not meet Leveson’s minimum requirements for a competent regulator, has recently announced that its Chairman Sir Alan Moses will be replaced by Lord Faulks, who sat on a party political basis before his appointment was confirmed, which begins on January 1st 2020.

The fact that newspaper publishers have signed up for another five years – in the knowledge that their coverage will be regulated by a politician from January – should be concerning to anyone who believes in freedom of the press.

IPSO gloss over the detail that, in fact, two publications are leaving IPSO – CityWire and Connect.

2)  Abuse of marginalised groups in the press.  IPSO won’t even consider discrimination complaints about coverage targeting groups of people.  Millions of people can be affected in this way. Some of the most serious abuse affects Muslims, travellers, transgender people, and other LGBT people.

3)  Putting a politician in charge of press regulation.  This is exactly what IPSO did, when Lord Faulks’ appointment was announced.  Lord Faulks was a partisan Member of the House of Lords before his appointment as Chair of IPSO was announced, and he was even in Government only a few years ago.  Press freedom advocates around the world recognise that politicians should not be in charge of press regulation, and the Leveson model prohibits it.

4)  Failure to change.  When first appointed, the incumbent Chair Sir Alan Moses promised significant changes at IPSO.  The reality has been few reforms at all, with almost all changes being purely cosmetic or having the most insignificant practical effects.

5)  Zero regulation. Based on the number of complaints “handled” in 2015 and 2016, IPSO has likely had more than 50,000 claims brought to it in the last five years. Of them, IPSO has presided over zero investigations, zero fines, and zero arbitration claims.  It has, however, lobbied on behalf of press interests.  But it has completely failed to regulate.

Five years of failing the public

Its origins can be traced back to a plan for regulation submitted to the Leveson Inquiry by Lords Hunt and Black – both involved with the previous body which collapsed at the time of the Inquiry, the PCC.  Leveson rejected their proposal on the grounds that it was not sufficiently independent or effective.  Instead, he recommended a system of tests for requiring minimum standards of independence and effectiveness from press regulators.

But those plans nonetheless bore remarkable similarities to the IPSO system, which newspaper representatives began to develop shortly afterwards.

During the course of its establishment IPSO’s proponents claimed that as a regulator, it would be the “toughest in the Western world”, and that it would comply with “all the key elements” of the Leveson Report.  They even put those claims in a newspaper advert. It was found to be misleading by the Advertising Standards Authority.

Then came the appointment of Sir Alan Moses as Chair.  In an appearance at the Parliamentary Lords’ Communications Committee, he was critical of some aspects of the IPSO rules.  He promised to put a “red pencil” through many of them.

In practice, reforms have been few and far between, and consistently cosmetic in nature.

Over the course of the first five years, IPSO has not ordered a single investigation or fine.  It has not processed a single arbitration claim.

Hacked Off has worked with the victims of press abuse throughout this period to hold IPSO to account, and campaign for it to abide by the recognition auditing system recommended by Leveson.

Today’s announcement marks five years of failure for IPSO.  It still does not meet the Leveson requirements. As a result, hundreds of individuals have suffered press abuse without any meaningful regulatory recourse.  Millions of people who are targeted for discrimination in the press have also suffered. That has been the cost of publishing executives’ failure to establish independent self-regulation of the press.

The next five years

With news publishers reaching higher readerships than ever before through their websites, independent press regulation has never been more critical.

But while the largest publishers persist with IPSO, membership has grown for the UK’s independent regulator IMPRESS.  Dozens of local and investigative outlets are now members of the well-established regulator.

The IPSO system, meanwhile, is unsustainable.  Just like the PCC, and the Press Council before it, it will be ill-equipped to respond to the next outbreak of serious wrong-doing in the industry.  And as long as sham regulation persists, regrettably, wrongdoing is likely to recur.

Victims of press abuse are more determined than ever to see independent self-regulation of the press in the UK, and Hacked Off are committed to seeing it delivered.

We are confident that, with the support of the public and victims of press abuse, there will not be another five years of failure.