The Sunday Times has been widely condemned for running a column by Rod Liddle over the weekend in which he suggests extremists should blow themselves up in London’s Tower Hamlets, away “from where the rest of us live.” The piece has been widely criticised for inciting violence; with politicians from the borough labelling Liddle as “poisonous” and “racist”.

Discussing Anjem Choudary’s release from prison, Liddle proclaims to agree with the radical preacher that “British Islamists” should “blow themselves up” preferably “somewhere a decent distance from where the rest of us live. Tower Hamlets, for example.”

IPSO have received a number of complaints, but the reality is that the so-called press regulator cannot discipline the Sunday Times for a single word, even if it incites hatred or violence, because of a deliberate loophole in the Editors’ Code where group discrimination complaints cannot be considered.

The column prompted a response from the Mayor of Tower Hamlets, John Biggs. In a statement, the Mayor described the column as “utterly appalling” and “deeply insulting” to Londoners, and demanded the paper print a “full apology.” Mayor Biggs went on to criticise Liddle’s ‘us and them’ language as “unacceptable and not befitting of mainstream media in 2018, or at any time.”

Mayor Biggs went on to question whether someone like Liddle should be writing for the Sunday broadsheet.

Jim Fitzpatrick, the MP for Poplar and Limehouse in Tower Hamlets, described the comments in the article as “disgusting and offensive”.

“We have 300,000 residents in Tower Hamlets and to suggest that Anjem Choudary should come here and blow himself up is hateful,” he told The Independent.

Reacting to the offensive piece, MEND (Muslim Engagement and Development) said:  “This is another incidence of Islamophobia being peddled under the guise of thinly veiled satire. We must ask ourselves what would happen if a Muslim man had said something similar?

Such comments serve to reinforce inaccurate and negative stereotypes against the Muslim community and strengthen far-right Islamophobic rhetoric.” 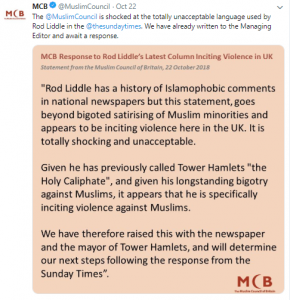 The Muslim Council of Britain also responded, stating that they had written to the Managing Editor of the Sunday Times and are awaiting comment.

And it didn’t stop there. Tell Mama also responded, condemning the “shocking choice of language.”

The All-Parliamentary Parliamentary Group on Hate Crime commented on the “shockingly offensive rhetoric that will do nothing except fuel prejudice and intolerance”, and stated that “there are editors that bear a huge burden of responsibility for the rise in hate crime.”

IPSO confirmed to iNews that it has received complaints about the article under Clause 12 (Discrimination) and Clause 3 (Harassment) of the Editors’ Code of Practice. IPSO says it is processing the complaints but cannot provide further information at this point.

We know all too well that the sham regulator has no choice but to dismiss these complaints entirely, because Liddle’s abusive remarks are aimed at Muslims in general, not an individual. There is a deliberate loophole in the Editors’ Code which means that complaints from groups about discrimination cannot be considered. It is this loophole that protects newspapers from sanction over racist or otherwise abusive language, so long as it is not aimed at a specific individual.

In other words, even when an article incites hatred or violence – and even when it does so illegally – there is no regulatory redress for Muslims or any other targeted group.

Incitement to violence is one thing – supposedly “hateful thoughts” are another (e.g. The Quran, The Bible, the Communist Manifesto, Atlas Shrugged or 1984. Individuals should be protected against lies, harassment and violence.