The media arguing that searches and arrests should not be kept private seek to have one rule for their own industry and another for everyone else.

The BBC has paid out a total of £2m in legal costs to Sir Cliff Richard over a High Court privacy case which it lost in 2018 . 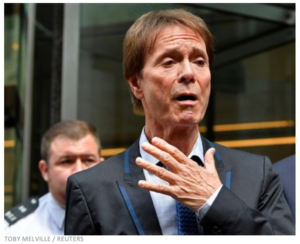 Last Year, Sir Cliff won a landmark case after the BBC filmed and broadcast a police raid on his home in 2014 and reported that he was being investigated over historical child sexual abuse claims. He was never arrested or charged. He later sued the BBC for invasion of privacy.

At the end of the two-month High Court privacy trial, Mr Justice Mann ruled that the BBC had infringed Sir Cliff’s privacy rights without legal justification.

He also dismissed the BBC’s argument that it was justified in reporting the raid under rights to free expression and freedom of the press.

Police tip-offs to the media ahead of searches and arrests were criticised at Part One of the Leveson Inquiry in 2011 in respect of newspapers, and this case shows that the problem still very much exists. The relationship and interactions between the media and police that lay behind this disturbing invasion into Sir Cliff’s privacy is exactly what would have been and still should be investigated in Part Two of the Leveson Inquiry – an inquiry promised to the victims of press abuse by Cameron’s Government, only to be cancelled last year.

Sir Cliff’s judgment highlighted the fact that the public and some parts of the media do not always comprehend the distinction between an innocent person subject to investigation and outright guilt, and that the coverage of a salacious allegation is usually greater than that of them being subsequently cleared.  In doing so the judgment referred to the treatment of Bristol landlord (and now Hacked Off Patron) Christopher Jefferies, who was the subject of demonisation by the press when he was arrested for the murder of his tenant, Joanna Yeates, despite the fact he was never charged. 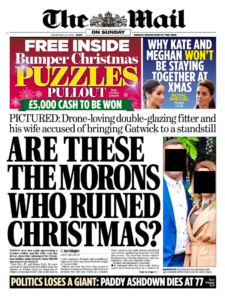 And there are many others whose names have been published without having been charged with a crime without any legitimate reason to do so – beyond selling newspapers. The Daily Mail identifying the couple who were accused of being involved in the Gatwick drones in Christmas 2018 was not in the public interest and they couple were later released without charge. Like Christopher, these people were entirely innocent, and yet their names were broadcast in association with crimes they did not commit.

When journalists were arrested in relation to data theft, bribery and phone hacking, in general, newspapers who knew who they were and reported their arrest did not feel obliged to publish their identity – and rightly so. But why is the reaction different for Sir Cliff, the Gatwick couple, and Christopher Jefferies?

It suggests that some in the media arguing that searches and arrests should not be kept private seek to have one rule for their own industry and another for everyone else.

The trial revealed emails between BBC journalists that led a judge to conclude the BBC was motivated by a desire to prevent rival outlets getting the scoop. The case has set new legal precedents that have made news outlets more reluctant to name individuals under investigation, but who have not yet been charged.

There are sometimes good reasons to name a person before charge.  That decision should be taken where, for example, naming a person might encourage other alleged victims to come forward, or where there is a threat to life.  But all too often, the only reason for publishing a suspect’s name is to sell newspapers.

Our view is that in cases like this, any decision to name an individual before they are charged needs to be taken in an accountable manner where the public interest is balanced against the privacy interests of the individual.  In considering the public interest, the interests of justice, the welfare and wishes of the alleged victims, and specifically, the likelihood of more victims coming forward, are the primary concerns. It should not be, as it was in this case, that a suspect’s name is revealed as a result of a secret deal stitched up between a reporter and the police.

A Bill that has been debated in Parliament over the last few years (the Anonymity (Arrested Persons) Bill) would prohibit the naming of individuals not yet charged with any offence in the media.  Under the Bill a Judge, however, would be able to permit the naming of an individual where doing so might help the police find more alleged victims, witnesses, and similar.  We don’t think that Bill is perfect, but the principle of allowing a Judge to determine the public interest in disclosure, rather than a reporter and police officer doing it in the corner of a pub, would be a significant improvement.

In any case, there is no justification for the raid on Sir Cliff’s home to be filmed. Even if there was a legitimate reason to name Sir Cliff, for example in the interests of justice, and the decision to name him was reached in an appropriate manner, and his name was published in an appropriate way (i.e., had the BBC and South Yorkshire Police acted radically differently), then it would still not have been appropriate to broadcast a raid on his personal home.