This post originally appeared on Simon Carne’s “Irregular Thoughts” and is reproduced here, with permission and thanks.

After years of campaigning for press freedom, is the Times now regretting its success? 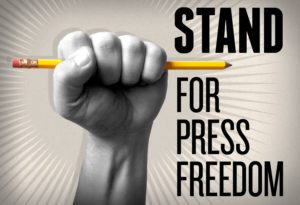 Reading the Times newspaper yesterday, I was somewhat gobsmacked to see Sean O’Neill, the paper’s chief reporter, complaining that – “The UK has no constitutional protection for a free press and no real cap on costs for libel actions.” These two facts formed the centrepiece of his argument that abuse of British courts is killing free speech.

What he says is, of course, correct. The reason his words are so dumbfounding is that this state of affairs flows directly from the fact that newspaper publishers, including News UK, publisher of the Times, campaigned for it to be this way.

Perhaps Mr O’Neill has forgotten. It was, after all, a little over four years ago that the campaign was at its height – having started around five years before that. A lot has happened in the world since then: Brexit, Trump, Covid. But, still, his newspaper did spend more than five years fighting the fight that he apparently now wishes they had lost.

Let’s start with protection for a free press. It was one of the key recommendations of a public inquiry that concluded in late-2012. Following the discovery that investigators working for News of the World had hacked the phone of murdered schoolgirl, Milly Dowler, Lord Justice Leveson was asked by the Cameron government to investigate and report on the culture and ethics of the press. Leveson was very critical of some aspects of journalism which, he said, needed to be regulated. He was, however, very careful to stress the importance of a free press: hence his central recommendation that press freedom be enshrined in law.

But the newspaper proprietors didn’t want a statute. They were completely opposed to any laws being written to govern the functioning of the press. They wanted a Royal Charter created in order to specify how a new press regulator would be created. And so, to keep the press happy, a cross-party agreement in parliament determined that a Royal Charter it would be. But a Royal Charter cannot change the law: it is a document for creating public bodies like universities, professions and the BBC. Protection of press freedom could not be enshrined in law without … well, without passing a new law.

Readers may be forgiven if they thought the press had been opposed to a Royal Charter, not in favour of one. But that only came later. Initially, the press was definitely in favour – so much so that they drafted one themselves and submitted it to the Privy Council, the body that advises the Queen on these matters.

But the press seems to have been taken by surprise when the Privy Council said “no” or, rather, “not quite.” A revised version of the document – one with “subtle” differences – was approved and came into being. Having failed to get exactly their own way, the press became totally opposed not only to the actual charter that was signed into being by Her Majesty but also to the whole idea of using a charter. One editor went so far as to describe it as a “medieval piece of nonsense” – only to retire from his post to take up a position as head of a body founded under a Royal Charter.

And so to the second of Mr O’Neill’s complaints: “no real cap on costs for libel actions”. He points out – with full justification – that wealthy individuals often use the threat of costly litigation as a way to deter the press from writing about them. But, once again, Leveson had a solution for this. He proposed a scheme of low-cost arbitration. If wealthy individuals chose to sue, rather than use the scheme, they would have to pay both sides’ costs. But, if the press chose not to fall in with such a system, the newspaper would have to pay both sides’ costs.

The cost protections were to be written into law (the infamous Section 40 of the Crime and Courts Act 2013) and the lost cost arbitration scheme would follow on from the implementation of the Royal Charter. But, once again, the press’ objection to the use of law and its opposition to the Royal Charter put a stop to all that. After a sustained campaign of myths, half-truths and blatant untruths from our mainstream media, the government resiled from Section 40 and the mainstream press declined to bring into being the charter-based low-cost arbitration scheme.

And so, here we are. The Times has devoted space in its comment pages this week to call for a cap on costs for libel actions, but only if it limits rich people. A charter-based system that incorporates a cap low enough to allow poor people to sue newspapers has been rejected. 1

The Times also argues for legal protection for a free press, despite the newspaper’s much-vaunted belief that freedom of the press is a concept that sits above the law.

You couldn’t make it up. Believe me, I didn’t.

A charter-based scheme does exist. It was created by an organisation called IMPRESS, but no leading newspaper has yet signed up as a member.