Jamie Wareham is the founder of QueerAF, a new platform launching the careers of emerging and LGBTQIA+ creatives. Learn more here. 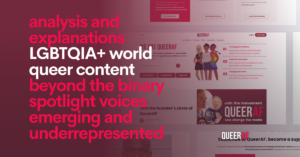 An editor once told me to stop pitching ‘gay stories.’ They said there was no ‘money’ or ‘audience’ for them.

As a young, budding journalist – this was hard to hear. And its impact was huge. It made me think pursuing a career with LGBTQIA+ lives in mind was worthless.

No one should be told their lives aren’t worth telling a story about.

I didn’t understand this at the time. But newsrooms create awful experiences like I faced because they are locked into a system.

To boil it down, it’s all about adverts. Most journalism is no longer about being the vital fifth estate. It’s about serving enough adverts to keep the lights on.

This is creating enormous pressure on journalists and editors, who by and large, want to make a difference with their reporting.

Most are judged, not by the quality of their journalism, but by the number of clicks they create. Left with no choice but to chase stories that social media algorithms will lap up.

Social media, also an ad-funded space, rewards content that gets engagement. The trouble is, nothing turns us into keyboard warriors more than arguing.

So, it’s little surprise that many parts of the media, whether intentionally or not, drop daily content inflaming, instead of calming conversations about important policy discussions. Papers are creating these so-called ‘culture wars’ – for clicks.

Take the rise of content about transgender people. Barely a day goes by where the lives of this marginalised community aren’t in the news. The headlines are reminiscent of the ‘gay panic’ pushed by the papers in the 80s.

And the world is watching. UN LGBT+ rights body ILGA Europe’s latest report says that “anti-trans rhetoric continued to cause serious damage in the UK again this year…mainstream newspapers ran one or more anti-trans articles every day.” 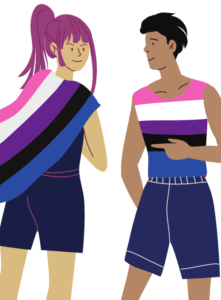 The trouble is, while this all rages in the papers, the real-world effect on all LGBTQIA+ lives is scary.

It’s seen the Council of Europe recently group the UK with Russia, Hungary and Turkey as a place where ‘virulent’ attacks against LGBTQIA+ people are rising.

And so here is the divisive cycle we’re stuck in. Journalists produce increasingly divisive stories. These attempt to deliver on challenging advert KPIs. Leaving them chasing clicks from social media. All to repeat the cycle again.

Journalism should be commissioned because it counts, not because it drives clicks.

That’s why we’re seeing a rise of independent media looking beyond adverts to fund journalism.

Substack and Patreon are easy examples of the mood music I’m alluding to here. But we can also look at the rise of non-profit media in America with great hope.

In the UK, players like Byline Times who have a loyal audience who pay for content, even though it’s free to all, because of the editorial values promised – are also good examples.

You’d be forgiven for thinking that – surely the media has moved on from the homophobia I faced just shy of a decade ago. I know for certain, it hasn’t.

Launching a new platform, QueerAF, that works with underrepresented LGBTQIA+ writers just last month has been a reminder of how rife this culture in U.K. media still is.

“As someone who’s written for mainstream platforms, I’ve been increasingly frustrated with how I am not allowed to write about certain things. Or [being told] certain angles aren’t ‘mainstream’ enough.” non-binary activist and trans advocate Ugla Stefanía,(they/them) told me before writing for us. 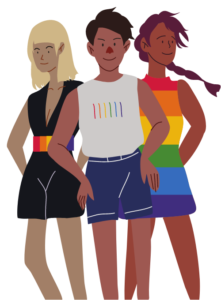 The feedback we’re getting about our approach, which gives freedom to writers to focus on what counts, is a reminder of the power of journalism has to change lives.

Instead of having to endlessly react to the stories that question our very existence, often to give more clicks to media that publish that very content – we’re asking our writers to model the change they want to see.

Rather than asking people to use their trauma for drama, and outrage clicks – we’re asking them to think about their boundaries and wellbeing when pitching to us.

This is an exciting time for journalism if we can harness and recognise what the audience needs. They are weary of clickbait. Exhausted by doom scrolling for news.

A return to the journalistic values the fifth estate should be related with is overdue, needed – and crucially, wanted.

I’ve launched QueerAF as a new platform funding queer media careers to answer this need. We’re ad-free and supported by a growing number of members, including comedian Joe Lycett. We commission emerging queer creatives to write our free weekly newsletter that skips social media algorithms and sums up the complex LGBTQIA+ world in a TLDR format. I hope you can support our mission to change the media.