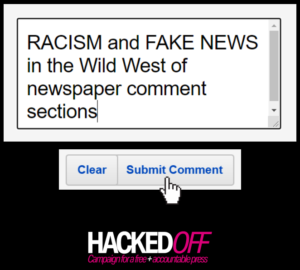 “This virus came engineered in a Chinese lab.” Sound familiar? This comment – hawking an unproven and debunked conspiracy theory about COVID-19 – is one of hundreds we came across in our analysis of 53 examples of comment sections content dating from January to April of 2020.

Hacked Off has today released a report titled “Racism and Fake News in the Wild West of newspaper comment sections.” It sets out the findings of a review of newspaper comment sections on the websites of The Sun, The Mirror, The Daily Telegraph and MailOnline (The Daily Mail). They include “fake news”, conspiracy theories and racist language. Comments were drawn from coverage of news stories about the coronavirus.

Comment sections appear on several popular newspaper websites. They enable readers to engage with a story, pass on comment on it, and discuss it with other readers. As with any social media platform, these spaces can be abused and need moderation.

As these comments have been published and broadcast to millions of people by newspaper websites, hate crimes against Chinese people have soared. On 13th May, Government Ministers reported that hate crimes committed against people from South & East Asia had risen by 21%.

But while newspapers have been critical of the apparent failure of Facebook, Twitter and other companies to do enough to moderate their platforms, this report exposes their hypocrisy of allowing harmful content to appear on “below the line” social media platforms of their own newspaper websites.

This review shows why – if the Government is serious about tackling the problem – it must include newspapers and their comment sections in any regulatory framework., which is why we’re asking people to call on the Parliament to level the playing field. After all, harm is harm and nobody’s tweets should be more regulated than the Daily Mail.

You can read the full report here, then contact your MP and make your voice heard: enough is enough. It’s time for independent regulations of online and offline newspapers.

CLICK HERE TO WRITE TO YOUR MP. ENOUGH IS ENOUGH.

There’s no point in contacting my MP because she’s part of the problem.

I hold our disgusting press in utter contempt. I rarely buy a newspaper and would never buy a Murdoch paper, the Express or the Mail

Cameron and his government promised to implement Levison and didn’t. Why? Because they rely on the press barons to back them.

What is happening is truly distressing. “underground’ racism is being given full reign by the populist leaders who disclaim racism at the same time as milking it for votes, not least via the tight-wing press.

Unfortunately you are being very selective,, the Independent, Guardian are equally guilty of the comments you quote,, these publications are not whiter than white as they would like us all to believe.

It’s time these newspapers were held to account for what they publish, particularly on line.
The Mail on line is a particularly poisonous publication and needs immediate attention. It’s full of on line bullying, racism and defamation, and worse – it goes almost completely unchecked, unverified and unedited. The mechanism for complaints is also weak.

First of all stop using the word “fake” that’s Trumps favourite word and he’s the most fake president the USA has ever had. Sensationalism out and out lies where is the proof but we know they don’t understand what truth is they don’t care what the truth is they just want a headline they don’t care if it ruins lives or family’s or friends gives fire to haters, this government won’t help they are the ones who feed these lies leaked letters come on oops I gave them the wrong papers oh yeh as if, deliberate is what I call it, can anyone come up
With a solution ???

An alternative to ‘fake news’ is the phrase which is the title of a book by Nick Davies “Flat Earth News”.

Please don’t use grey text in the main text. – its too hard to read. I can hardly read this that I am writing! What’s wrong with black?

The purpose of newspapers has become one of feeding their readership’s need for repeated confirmation bias and seeking out further bias issues that can polarise their readers into so-called ‘loyalty’. Whilst attacks on celebrities are acceptable, they are careful not to attack those prized by their readers and to show reciprocity with their political allies on left and right. So-called right wing press (more specifically those on the extreme of single issue continua such as Brexit, Racism, Xenophobia) are particularly entrenched and presumably self-serving.

We really have to educate people who store all this hate instead of them trying ton understand that in the main they are like us, and would enjoy peace in a life with friends.

I quite agree but how to contain the Murdoch et al is the problem. It is similar to attempting to get Blair convicted as a war criminal when the judiciary systematically find him innocent of all crimes. We live in a very sick country.

I really don’t believe ‘attacks’ on anyone are acceptable unless it’s going to be in the public interest. That mob has been responsible for some full on sh-t . And after watching the recent tv series I just felt that at least 10 of them should be jailed !?
Why the leniency? ….. Why are people still buying these papers ? Are our leaders so bloody weak? ( don’t think JC would have meet him?…… ?) please no ‍♀️