Most members of the British press are allowed to discriminate against groups or categories of people, and they do just that. 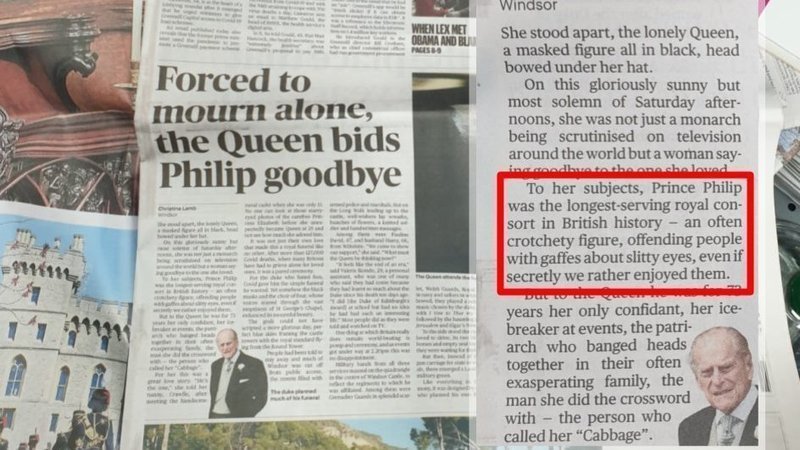 The Times’ coverage of Prince Philip’s funeral was “racist, harmful and wrong”

This April, in the wake of Prince Philip’s funeral, The Times published an article by its Chief Foreign Correspondent, which stated:

“Prince Philip was the longest-serving royal consort in British history – an often crotchety figure, offending people with gaffes about slitty eyes, even if secretly we rather enjoyed them.”

The “gaffe” referred to was a racist joke made by Prince Philip to exchange students while he was on a British State visit to China in 1986: “if you stay here any longer, your eyes will go slitty”. The late monarch’s penchant for such humour was well-documented and condemned by many at the time, but the reporter’s decision to make light of it now is problematic.

This article contained racially discriminatory language. Referring to a racist joke as nothing more than a “gaffe” is trivialisation of racism. Stating that “we” enjoy such language suggests that there is a collective that takes casual amusement from racism. Almost certainly, this collective “we” does not include non-racist readers, or those of Chinese or East or Southeast Asian (ESEA) descent.

Within days, tens of thousands of people had signed a petition demanding an apology and a retraction from The Times. That number has since increased to over 64,000 at the time of this writing. In response, rather than printing a retraction, The Times quietly deleted the line from digital copy (and not print). The Editor of The Times, Emma Tucker, stated that the newspaper had not “intended” to condone Prince Philip’s words, and that “[The Times] very much regret[s] that some readers have taken it as doing so.” She then applauded the reporter for a “whole career reporting on discrimination and justice.”

Ms Tucker’s non-apology is symptomatic of a lack of understanding that racism, whether intentional or not, causes actual harm to real people. Whether Prince Philip’s comment was racist is not a matter of intention or of the interpretation of an offended few: it was racist, full stop.  The Times’ presentation of that remark as trivial, and even “enjoyable”, was harmful, wrong, and likely to perpetuate racist attitudes. If we are to strive for a racially diverse and inclusive society then we must condemn racism when it occurs.

The Western focus on Chinese or ESEA differences and, particularly, on eye shape, is just that— Western. This is a focus and perspective that is forced upon most ESEAs who have spent time where non-ESEA culture and perspectives are dominant. At best, ESEA features are exoticised (which is dehumanising and compounds the over-sexualisation and fetishisation of ESEAs) and at worst, the emphasis on ESEA differences inspires fear, implicit bias, discrimination, racial hatred, and increasingly during the pandemic, physical violence. Moreover, a persistent focus on ESEA physical features is a barrier to ESEA assimilation into societies where they are a minority.

Describing ESEA features as “slitty” is racism that has hundreds of years of history in the West. It includes nineteenth century French and German ethnographic descriptions of the inferior, ‘slitty’- or ‘slant’-eyed ‘Chinaman,’ twentieth century anti-Asian immigration propaganda in the US and the UK depicting the verminous “Yellow Peril” (an influx of Chinese refugees from the Opium War), British popular fiction featuring the slant-eyed criminal mastermind ’Dr Fu Manchu’ throughout the 1900s, and the British media’s portrayal of London’s Limehouse Chinatown as a den of vice and villainy in the 1940s-50s.

In the 21st century, this specific mode of racism has abated but not ceased. ESEAs who have spent any part of their childhood in non-ESEA countries will be familiar with myriad racist nursery rhymes, mostly centred around eye shape as well as poor hygiene, low intelligence, poverty, and sex. For example, a racist chant still heard in American schoolyards, with accompanying hand gestures:

And in the UK and Commonwealth countries:

Unfortunately, this particular mode of racism is not limited to children. In 2008, the Spanish men’s national basketball team pulled their eyes into slits to pose for an official photograph prior to the Beijing Summer Olympics. In 2018, the Serbian national women’s volleyball team posed the same way upon qualifying for the World Championships in Japan. In 2016, the German EU Commissioner for Digital Economy and Society Günther Oettinger, referred to a visiting delegation of Chinese Government officials as “schlitzaugen” [slitty-eyes] in a speech to European businesspeople.

Even where racism is not overt, the British media has — consciously or unconsciously — effected anti-ESEA discrimination. In 2020-2021, British newspapers including The BBC and The Guardian consistently published photographs depicting Chinese or ESEA-related imagery in articles about COVID-19, despite Chinese people constituting a mere 0.7% of the British population. While the media has rallied to support NHS workers as a whole, the particularly high death rate among Filipino frontline workers in the UK has not been reported. Filipinos were the single largest nationality to die from COVID-19 in the UK and while they represent 3.8% of the nursing workforce, they made up 22% of nurse deaths.

In the absence of a retraction and an apology from The Times, I contacted the Independent Press Standards Organisation (IPSO), the complaints-handler of which The Times and the vast majority of the UK’s newspaper and magazine titles are members (along with over 2,500 other publications).

IPSO describes itself as “independent” and its foremost value is to “carry out its work free from control or interference by the press…” IPSO’s foremost task is to enforce the Editors’ Code of Practice, which is written, reviewed, and revised by the Editors’ Code Committee. Problematically, the IPSO Code Committee is composed of the very members of the press that IPSO purports to regulate. Emma Tucker, the aforementioned Editor of The Times, is one of 15 members of this committee.

IPSO’s Discrimination clause is identical to that of its predecessor, the Press Complaints Commission (PCC), which IPSO replaced in 2014. In 2012, Part 1 of Leveson Inquiry, the last judicial public inquiry into the culture, practices, and ethics of the British press, observed that the PCC’s Discrimination clause fails to capture the “vast majority of complaints of discrimination,” which typically involve discrimination against groups. Then-Lord Justice Leveson wrote: “…I see no reason why representative organisations should not be entitled to raise a complaint in relation both to accuracy and prejudice where articles are discriminatory in respect of a group.” Leveson ultimately recommended that the new regulatory body (for example, IPSO) must have the power to take complaints from third parties and representative groups.

The press refused to act on the findings of Part 1 of the Leveson Inquiry in the industry’s establishment of IPSO, which does not meet the recommendations Leveson made, and Part 2 was subsequently cancelled by the Conservative Government in 2018. In the six years since IPSO’s establishment, the Editors’ Code Committee has not amended its Discrimination clause, under which discrimination against groups remains unregulated for the vast majority of UK press titles.

This fact has not gone unnoticed by a number of MPs. In 2018, members of the Home Affairs Select Committee questioned IPSO on the fact that out of 8,148 complaints it received in one year that cited its Discrimination clause, IPSO upheld 1. The majority of these complaints involved alleged hate speech towards Muslims, a minority group that has suffered consistent Islamophobic and discriminatory media coverage throughout the past decade. Discriminatory and misogynistic reporting of women is also unrelenting. This past April, Shadow Home Office Minister Jess Phillips spoke on the media’s damaging portrayal of women and the need for reform to currently insufficient press regulation. In the unregulated comments sections of online newspapers, racist hate speech also prevails and spreads without repercussion.

We cannot claim to live in a truly diverse and inclusive society if discrimination against all groups or categories of people including ESEAs is allowed to happen. Here are five things you can do to help right this wrong:

Questions about this article can be directed to campaign@hackinginquiry.org.