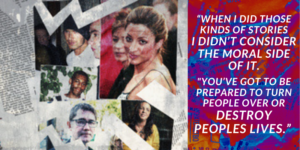 A new Channel 5 documentary series, Sex and Power [watch online here], reveals the extent to which some newspapers intrude on and damage people’s lives.

Episode 2 in particular, “Named and Shamed”, describes the experiences of those who have become tabloid targets.

The documentary highlights the impact intrusive coverage has on people’s lives and raises wider questions about the relationship between the press and popular culture. 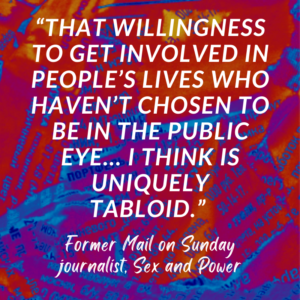 Danielle Hindley, Hacked Off supporter and press abuse victim features in the episode.

Danielle’s mental health was seriously affected after libellous coverage about her beauty business was published in the Mail on Sunday in 2017.

Pursuing the story, a reporter entered Danielle’s house under a false identity and used a hidden camera to secretly film her.

Commenting on the intrusion, Danielle says,

“I think I wasn’t a real person to her [Mail on Sunday journalist]. I was just a prop in what she was doing. She needed another story to go with what she already had. I was unlucky in that way.”

Following publication she suffered panic attacks and was even diagnosed with Post Traumatic Stress Disorder.

“If you live in a village, the gossip is scandalous and when it is not even true that messes with your head.”

Read Danielle’s story in her own words.

As an investigative journalist, Graham worked for Mirror Group newspapers for eight years.  An expert on newspaper culture, he now works to expose wrongdoing, hypocrisy and illegality at national newspapers.

He says tabloid stories must be “Part entertainment, part news story, part popular culture – and the truth only matters in a tiny bit of that.”

A former Mail on Sunday reporter also recalls the crass nature of tabloid culture in the series:

“I remember one person who had just written a benefits cheat story. I remember him putting the phone down to her and saying [that they had] just ruined somebody’s life”. 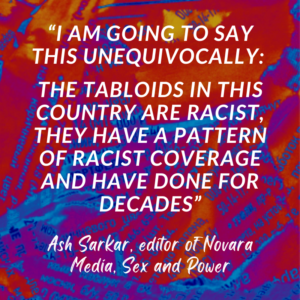 Some newspapers’ willingness to lie, abuse and intrude goes on.  This series highlights the fact that this is a cultural problem with parts of the press – not about just one title or editor.  That’s why independent press regulation is so important.

Newspaper circulation online – and with it the press’ capacity to cause harm – is higher than ever. Top news brands reach 36 million people everyday.

Unethical press conduct continues to happen because newspapers and their websites are still not properly regulated.

Most newspapers are members of IPSO, a sham complaints-handler which is run by the press itself. And IPSO does not adequately protect people from media abuse, intrusion, and intimidation.

You do not have to be in the public eye to face this kind of treatment. And currently, there’s nothing to stop newspapers from doing the same to another blameless person.

IPSO should be replaced by an independent authority which has no financial connection to the media. The problem is – Whom to appoint? Lawyers, Judges, politicians, clerics? “Ordinary people” on the lines of jury service?