In late June, a 66-page report by Professor Brian Cathcart and Paddy French of Press Gang, “Unmasked”, was published.  The report examined a series of investigative stories run by the paper which had the effect of demonizing Muslims.  Each of the stories was found to be substantively false and Norfolk’s conduct in researching and writing them breached what they considered to be normal ethical journalistic standards. They also identified serious editorial failures at the Times and failures to uphold standards by the press complaints-handling body IPSO.

Now they have written a follow-up report analysing the dismal responses to their damning investigation:

They called on the Times to commission an independent investigation into what went wrong and who was responsible. The Times responded by publishing a news report and a leading article. IPSO also published a blog.

“In summary, although neither organisation was able to identify a single inaccuracy in our report they entirely refused to reflect on the failures described or to consider doing anything about them.

We conclude from this that Norfolk, the Times and IPSO are unable to dispute the detailed criticisms set out in UNMASKED.

Their responses, in other words, confirm their guilt.

Another striking aspect of the response is that no other national news organisation and no journalist reported the very serious allegations we made, even in the briefest form.

The implication of this, as we see it, is either that executives and senior journalists at these organisations see nothing reprehensible in the conduct of Norfolk and the Times or that they are sufficiently unconcerned by the scandal that they feel no need to alert their readerships and audiences. Whichever is the case, they make themselves complicit in wrongdoing.”

UNMASKED – WHAT HAPPENED NEXT 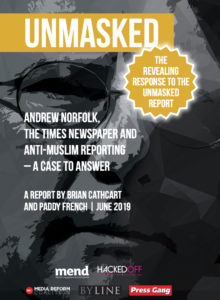 This report chronicles three major stories by a single journalist all of which contain allegations against a specific community.  It is notable that each of these error-strewn articles were written by the same man, and all have the effect of vilifying Muslims.  This looks very like a campaign targeted at the Muslim community.

But set aside the apparent ideological agenda for a moment and consider the layers of journalistic incompetence at the title which chose to publish these stories.

Some of the false information in these stories were not only the work of a senior journalist, but must also have passed through layers of sub-editing and senior editorial review.  Those responsible are people whose job it is to separate the truth from falsity, and yet multiple distortions and misleading facts appeared in each article

It would have only required one or two people to do their job properly to root those out (albeit undermining the story) in each case.

The phoney complaints-handler unable and unwilling to act

IPSO – the Independent Press Standards Organisation – is the body the largest newspapers set up to handle complaints after the previous body, the Press Complaints Commission, collapsed in the press ethics scandal.

IPSO calls itself a regulator, but it is more aptly described as a PR project established to give the perception of regulation.  It calls itself “Independent”, yet is unable to change its own rules without the consent of a committee of newspaper executives. Its own standards code is written by a committee of editors, over which IPSO has no ultimate control.

When the former press complaints-handler (the PCC) collapsed, the Leveson Inquiry recommended it be replaced by a truly independent  regulatory body with strict criteria for independence and effectiveness. When IPSO was formed by the largest newspapers in defiance of Leveson’s recommendations, various loopholes, deficiencies and other flaws were sewn into the constitution, which didn’t have a hope of meeting the Leveson criteria.

It is no surprise then, that in respect of each of these stories, IPSO failed to hold the Times to account.

The Tower Hamlet foster care story was published on the frontpage for five days in a row.  IPSO ordered one adjudication, not on the frontpage but on page six, more than six months later.  No action was taken by IPSO in respect of the Rotherham council story. In respect of the Just Yorkshire case, The Times smuggled out a correction on Christmas Eve in its clarifications column.  IPSO – despite conceding that the paper had got it wrong – deemed this a sufficient remedy and required no further action.

It is no wonder The Times thought they could get away with it.

The investigation that will never happen

The largest newspapers, no doubt, believed they had it stitched up: this threshold was insurmountably high.

Yet this report exposes breaches of the standards code which are, in our view,  undeniably both serious and systemic. Yet still, no investigation is forthcoming.

IPSO fails not only on powers – but on inclination.  It seems to show no desire to protect the public, at the displeasure of its press paymasters, even on the rare occasions it has the power to do so.

The Times: questions to answer

Firstly, this is a newspaper which has a reputation for producing some quality journalism.  It is well resourced, and unusually in the industry presently, turns a profit.

So how did three stories packed with errors get published?  These weren’t just minor errors – they were fundamental to the stories, in each case.  This speaks to serious lapses in editorial competence at the newspaper.

And secondly, what if the nature of the inaccuracies, which all served an anti-Muslim agenda, were symptoms of wider Islamophobic or racist attitudes at the newspaper?  What if The Times is institutionally Islamophobic?

The Times themselves are not equipped to answer this question.  It is a question for an independent body with expertise on equalities.

The Times must refer itself immediately to the Equality and Human Rights Commission for an Inquiry to consider whether institutional Islamophobia exists at the title.

The equalities watchdog, the EHRC, has the power to establish an inquiry into matters which engage sections 8 or 9 of the Equality Act.  Section 8 includes such provisions as encouraging good practice on equality and diversity and promoting understanding and importance of them.  The Times need not fear such an inquiry (which does not require grounds for suspected illegality), if the title is not institutionally Islamophobic.  It should refer itself for such an Inquiry immediately.

IPSO must be replaced by an independent regulator.

IPSO is complicit in the demonization of Muslims and other minority groups across the UK, by virtue of its failure to change the standards code and to enforce it fairly.  Further, while it often cannot launch investigations, what this episode has shown that even when it can, it chooses not to.

Parliament must act to ensure that all major news outlets are independently regulated, under the system for Recognised independent media regulation administered by the Press Recognition Panel.

The Independent Directors at The Times must take action to investigate the editorial incompetence at the paper which allowed these stories to be published.

To protect the reputation of the paper and prevent these catastrophic lapses in competence from recurring.

The Secretary of State for Digital, Culture, Media and Sport must take this episode into account in his consideration of the terms of News UK’s ownership of the Times – and reject News UK’s application to water down protections on quality.

The Times’ ongoing ownership by News UK is dependant on certain conditions, which were put in place when the titles were obtained by the company in 1981.  News UK is already in the process of seeking amendments to those conditions, which press reform campaigners and journalists have opposed – partly on the grounds that they would allow reductions in quality.  Given the findings of this report, it is essential that the Secretary of State considers whether this episode raises the possibility that quality is already in jeopardy at the title.

This report demonstrates the strength of the case made by Hacked Off and other reformists, who wish to see quality protected at the Times, for rejecting News UK’s application to weaken the protections on quality agreed to in 1981.

READ THE REPORT IN FULL HERE

while the right-wing papers are having a go at Corby, for being anti-Jewish.They’re keeping very quiet about being anti-Muslim’s

The Times was at one time a byword for excellence in reporting. How distressing that it has fallen so far.

I agree entirely, I fear right wing newspaper owners and politicians are practicing the same tactics used in Hitlers Germany and now as then people are fed lies and unfortunately not enough is being done by politicians is to expose this terrible threat

The public has been systematically lied to since at least 2003 if not 2001 .Blair’s lies re: Iraq and Afghanistan have led to the death of millions and the poisoning and destruction of those countries just how many millions of Muslims have died is unknown especially as NATO continues the genocide. It would appear that all news of our crimes go either unreported by the M S M or are presented as part of “The War on Terror”and therefore justified. Islamophobia has and is the order of the day. It is another story but connected that Julian Assange with Wikileaks revealed much of the evidence of U.S. & U.K. crimes and is now tried in this racist country by a judge whose husband is heavily involved in the manufacture of weaponry. We are living in a criminal country.