My lords, ladies and gentlemen, welcome to our little party. My name – in case you don’t know me already – is Sir Alan Moses. I am chairman of the Independent Press Standards Organisation and I am proud to be your host tonight as we celebrate IPSO’s fifth birthday.

And what a lot we have to celebrate!

But here we are in late 2019 and there are none of those things. I am proud to say – and I am sure everybody here is proud – that we still have our sacred and traditional British press freedoms.

As you know I’m a modest man, so I’m not claiming all the credit for IPSO. Others have played their parts. With some deft guidance David Cameron managed to break all those foolish promises, and he and Theresa May stifled the Leveson project. We owe them both a great debt.

And let’s not forget the support they received from John Whittingdale and Matt Hancock – and also from two people who are ornaments to both journalism and politics: Michael Gove and Boris Johnson. [Pause for applause].

Nor should we forget the contribution of the Democratic Unionist Party, whose votes made the difference when those turncoats Ken Clarke and Dominic Grieve [pause for booing] threatened to destroy us.

Another who played a vital role is Lord Black. Show yourself Guy! A big hand, please, for a shy man who personally embodies the link between the press and the Conservative party!

Two other pillars of press freedom are sadly not able to join us tonight: Paul Dacre and Rebekah Brooks. And of course even they, noble and powerful and charming and witty and generous as they are, have stood on the shoulders of even greater giants: Rupert Murdoch, Lord Rothermere, the Barclay brothers, Richard Desmond and those people who are making such a brilliant job of running the Daily Mirror.

Yes indeed, saving press freedom has been the work of many hands, but forgive me if tonight I don’t share too much glory. Tonight is about IPSO, and I know you all agree that over the past five years, since we seamlessly transitioned from the old Press Complaints Commission, IPSO has done fabulous work defending your freedoms.

Not one fine! Not even for £10! Not one investigation! And not one front-page correction in a national newspaper! And I am sure you have all admired the way we have reduced to a mockery the only sanction we ever impose: the inside-page correction.

Thanks to IPSO you can usually place your correction where you like. You can hide it under whatever anodyne heading you like (or none at all). And you can phrase it in the most slippery language you choose. I don’t know about you, but personally I love those corrections that say ‘we may have suggested such-and-such and we are happy to make clear . . ’.

‘May have suggested’? ‘Happy to make clear’? Sheer genius! Ladies and gentlemen, never say IPSO doesn’t give you your money’s worth!

And don’t forget our rulings – because despite the best efforts of our founders there are still some cases we just can’t disqualify. Tonight I want to highlight the contribution of the people who sign off the rulings. It’s not easy work and sometimes they are required to embrace varieties of logic of which even Donald Trump would be proud.

And as you know, they go the extra mile. On more than one occasion, for example, a paper has come to us pleading guilty to a code breach and they have still found a way to declare them innocent!

So, ladies and gentlemen, please put your hands together for our wonderful, creative Complaints Committee!

I must mention the pressures we have soaked up. No prime minister or cabinet minister has given us trouble, thank goodness, but we’ve had select committees and other parliamentary critics, plus the occasional noisy celebrity, Hacked Off [pause for booing], a few tiresome academics and of course Miqdaad Versi. Does that man have a bee in his bonnet!

There have also been moments – you probably remember the case of the Christian child in Muslim foster care, the Queen-backs-Brexit business, Fatima Manji, Ben Stokes, Gareth Thomas and plenty of others – when we have had to withstand contempt and ridicule. It’s been uncomfortable, but I should pay tribute to friends in the wider media, even beyond our members, for never drawing unnecessary attention to our difficulties.

We at IPSO have worked very hard – why I have occasionally put in a four- day week! – to protect the sacred freedoms you need. We have seen two general elections go by, and – yes – one referendum, in all of which your flagrant dishonesty made the Cambridge Analytica affair look like a playground fib. I modestly suggest tonight that you could not have done it without IPSO.

Yes, we’ve had five great years together and, since you have all unquestioningly signed your new contracts, we can now look forward to another five.

Here I must mention my successor, Lord Faulks. [Pause for applause.] You will know that some have claimed, disgracefully, that as a working Conservative peer who only three years ago was a government minister he is
not independent enough to be press regulator. How preposterous! Like me, Ed Faulks is a man of the law, and we in the law don’t know the meaning of bias.

What’s more, when we chose Ed he resigned the party whip in the Lords – so he now votes with the Tories completely independently! A magnificent gesture!

IPSO will be safe in Ed’s hands. And I can promise tonight it will continue to do all in its power to provide your newspapers and websites with the immunity from consequences that they desire. So charge your glasses as I close this address with a toast to something extremely special to all of us.

Ladies and gentlemen, I give you . . . press freedom!

Thank you, and enjoy your evening. 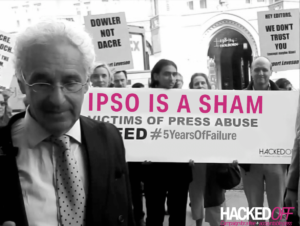 Victims of press abuse are more determined than ever to see independent self-regulation of the press in the UK, and Hacked Off are committed to seeing it delivered.

We are confident that, with the support of the public and victims of press abuse, there will not be another five years of failure.

Will you help us give Sir Alan and IPSO a birthday party they will never forget and call them out on Twitter and Facebook ahead of their party on Tuesday 29th October? Use the hashtag #5YearsOfFailure to join the online rally.

Brilliant! I hope it is published by at least one newspaper.

I am not sure all of that is true, but I could be wrong!

Indeed, they are a bunch of lying turds; dacre should be entombed in his fucking Scottish castle and why Rebecca brooks isn’t in prison is as big a mystery as the Meaning of Life. The lying bastards at ipso should be exposed for the sneaky shits they are and Levison Part 2 put into action IMMEDIATELY.
It truly beggars belief; Cameron promised Levison Part 2 and yet all the ‘papers’ can go on about is Brexit.
The British go on about ‘democracy’, ‘brexit’ and etc. so why aren’t they up in arms about the foul treatment, lies coming out of the British media as a matter of course?
Sickening!

Dear IPSO, what can I say other than the Donald would be proud of you. Regard Tony Nolan.

Dear Ipso You’ve done ‘The Donald’ proud and only now need being impeached.

I wrote to our local BBC Radio station and forwarded the speech, and to the press, a small gesture but we need lots of people to get involved to win the battle.

This is the third time during my lifetime, when the scandalous behaviour of sections of the British press have been highlighted and there has been pressure for legislative controls, only for the government of the day to “chicken out” and establish some form of totally ineffective self-regulation(albeit referred to and “independent”. It’s a disgrace.